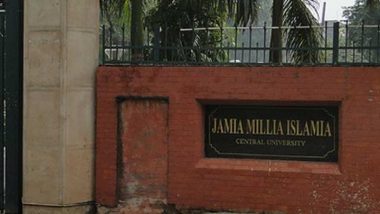 New Delhi, August 8: Six students of the Jamia Millia Islamia, who participated in the Smart India Hackathon 2020 challenge, were declared the winner by the government. The six were part of a group named "Team Monk" and presented a software-based solution to an agricultural problem put forth by the Bihar government.

The six students are part of the Department of Engineering at Jamia, the esteemed University based in the national capital which recently drew headlines for its role in the anti-Citizenship Amendment Act (CAA) protests. Jamia Student Safoora Zargar, Arrested in Riots Conspiracy Case, Granted Bail by Delhi High Court on Humanitarian Grounds.

The Jamia team was presented with a problem - numbered NS275 - by the Bihar government as it faces agricultural challenges each year due to uneven rainfall and floods.

The software developed by Jamia participants will allow the government to gauge in advance on the type of harvest from a particular soil. This will allow the policymakers and administrators to plan in advance irrespective of how the Monsoon season turns out.

The Bihar government representatives expressed satisfaction at the software-based solution prepared by the Jamia team. Based on their feedback, they were declared among the winners by the Innovation Cell of Union Ministry of Human Resources and Development (MHRD).

(The above story first appeared on LatestLY on Aug 08, 2020 09:49 PM IST. For more news and updates on politics, world, sports, entertainment and lifestyle, log on to our website latestly.com).