Safoora, 27, is in the 23rd week of her pregnancy. Her counsel Nithya Ramakrishnan brought to the court's notice that the overcrowded Tihar Jail and spread of COVID-19 could detrimentally affect her health. 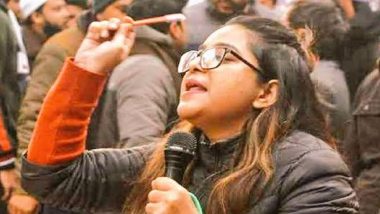 New Delhi, June 23: Activist Safoora Zargar, arrested in connection to her alleged role in Delhi riots, was granted bail by the Delhi High Court on Tuesday on humanitarian grounds. The bail order came after the Centre, through Solicitor General Tushar Mehta, said it does not object to her release from jail provided that the accused does not attempt to hinder the investigation.

Safoora, 27, is in the 23rd week of her pregnancy. Her counsel Nithya Ramakrishnan brought to the court's notice that the overcrowded Tihar Jail and spread of COVID-19 could detrimentally affect her health. Delhi Police Opposes Plea, Says '39 Deliveries Have Taken Place in Tihar Jail in Past 10 Years'.

The bench of Justice Rajiv Shakhdher granted a regular bail to Safoora after the Centre contended to the argument that she must be released on humanitarian grounds.

The HC directed Safoora to remain in touch with Investigating Officer through phone at least once in 15 days. She was also instructed to furnish a personal bond of Rs 10,000 and a surety of like amount.

S-G Mehta appealed the court to direct Safoora's counsel that she should remain in Delhi till the investigation continues into her role in the February riots.

The High Court, taking note of the S-G's appeal, directed Safoora to not to leave Delhi without seeking the police's consent. Her counsel told the bench that she may have to visit Faridabad to consult with her doctor.

Delhi High Court directs Safoora to not involve in any activities which may hamper the investigation. She has also been directed to not leave Delhi, has to seek permission in this regard. https://t.co/HeGxuMNnVg

Safoora was arrested on April 4, after the Delhi Police found her links to the alleged conspiracy hatched to stoke communal violence in the national capital. The riots had erupted on February 23-24, amidst raging protests in Delhi against the Citizenship Amendment Act (CAA) and the proposed nationwide National Register of Citizens (NRC).

(The above story first appeared on LatestLY on Jun 23, 2020 02:38 PM IST. For more news and updates on politics, world, sports, entertainment and lifestyle, log on to our website latestly.com).