Shri Rai said that today Delhi government has notified the ban on the firecrackers; coming Monday Delhi Police, Divisional Commissioners and the environment department officials will meet to form the SOP on the implementation of the ban. 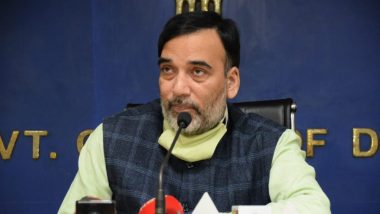 He also said that till today the Delhi government has received around 2300 complaints through the 'Green Delhi' App and we have solved around 1346 complaints and from the coming Monday all the 14 teams of the environment department will directly visit the spots of complaints. Shri Rai said that today Delhi government has notified the ban on the firecrackers; coming Monday Delhi Police, Divisional Commissioners and the environment department officials will meet to form the SOP on the implementation of the ban. Delhi CM Arvind Kejriwal Lays the Foundation Stone of Rohtak Road Redevelopment Project.

Shri Rai said, “The Delhi government is working round the clock from the very first day to combat the air pollution of the capital. The Delhi government has launched a war against pollution by which we are targeting all the local sources of pollution and trying to control any kind of pollution. We all know that the stubble burning inside Delhi is very negligible but despite that, we have taken serious measures to stop any kind of stubble burning inside Delhi. In association with the Pusa Institute, we have developed bio decomposer and sprinkled this on the farmlands of Delhi without taking any charge for this from the farmers."

He said, “In around 2000 acres of land the forming of non-Basmati rice takes place in Delhi and till now we have sprinkled the bio- composer at around 1800 acres and the remaining will be done soon. There were several questions regarding the use of this technique and one of the questions was regarding the effectiveness of this method. We started the sprinkling of the bio decomposer from 13 October now we have witnessed that 90%-95% stubble got converted to manure. But it is just one example and we have sprinkled the anti-stubble solution across the city. To study the impact of this we are setting up a committee named Pusa Bio-decomposer Impact Assessment Committee. This committee will be of 15 members and they will visit all the places where the sprinkling of the solution took place to study the impact. This committee will have 5 MLAs which includes Shri Sharad Chauhan (Narela MLA), Shri Jai Bhagwan (Bawana MLA), Shri Dharampal Lakhra (Mundka), Shri Gulab Singh Yadav (Matiala), Shri BS Joon (Bijwasan). There will be senior officials from the agriculture department who will be part of this committee and also scientists of the Pusa Institute.”

Shri Rai said, “The committee will submit the assessment report within 7 days and after getting the report we will submit the outcomes to the Supreme Court where the hearing on the matter of pollution is going on. On behalf of the Delhi government, I also welcome the expert Commission set up by the central government under Shri MM Kutty to monitor the air pollution issue. Delhi Govt Has Provided Cheap and Effective Alternative to Stubble Burning, Says CM Arvind Kejriwal.

He said, “In Delhi, we have also launched an anti-dust pollution campaign, red light campaign and 'Green Delhi' App. Till today we have received around 2300 complaints through the 'Green Delhi' App and we have solved around 1346 complaints which are around 58%. Most of the complaints are from North MCD. Most of the complaints we are getting are of the burning of garbage, burning of plastic and some demolition related matter. There are around 21 departments which are looking after these complaints through the nodal officers of these departments. From the coming Monday, the 14 teams of the Delhi government which are monitoring the ground situation and violations of the pollution control norms will directly visit these places to solve the complaints.”

Shri Rai said, “The Diwali is coming and following the guidelines of the Supreme Court the Delhi government decided to only allow green crackers. But looking into the rising number of Covid cases and the pollution situation Delhi Chief Minister Shri Arvind Kejriwal yesterday decided to ban any kind of crackers in Delhi. The AQI level of Delhi has reached a severe level. Chief Minister Shri Arvind Kejriwal on Thursday took a review meeting on the Corona situation and the preparedness of Delhi to deal with the COVID-19 cases, at a time when both pollution and Corona are adversely impacting the Delhi residents. Delhi Air Pollution: Arvind Kejriwal Bans Manufacturing Activity in New Industrial Areas; Only Hi-Tech, Services Industries Permitted.

The review meeting, convened by CM Shri Arvind Kejriwal, was attended by Chief Secretary of Delhi, Health department officials, District Magistrates, Revenue officials, etc. In the wake of the rising pollution and Corona cases in Delhi due to the festival season, the Delhi government has decided to put a complete ban on the sale, purchase, and use of firecrackers in Delhi from November 7 to November 30. Revenue Minister Shri Kailash Gehlot and Health Minister Shri Satyendar Jain were also present in the meeting. The Delhi Government has notified the ban on firecrackers today. By this, we have also notified the Delhi Police and divisional commissioners to implement this decision. On Monday, November 9 Environment department officers, Delhi Police and divisional commissioners will meet to formulate the SOP.”