A two-year-old boy died after falling from eighth floor of a residential town in Surat. The tragic incident, caught on a CCTV camera, took place Thursday afternoon. 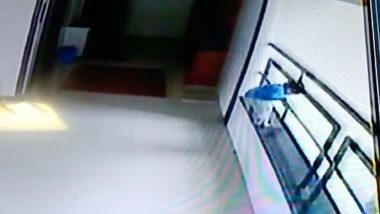 Surat, October 2: A two-year-old boy died after falling from eighth floor of a residential town in Surat. The tragic incident, caught on a CCTV camera, took place Thursday afternoon. The deceased, Mihir Dave, was playing in the lobby of the apartment when he fell. He was rushed to a hospital, but doctors declared him dead on arrival. A case of accidental death has been registered. Surat Shocker: Boy Kills Father After Being Reprimanded for Playing Games on Mobile Phone.

CCTV camera installed in the lobby showed Mihir playing alone around 2:15 pm when other family members were busy in routine work. In the video, the toddler is seen trying to climb on the parapet. After a couple of attempts, he climbs over the parapet and tries to look down through the gap between two rods. He leans out of the grill too much and loses balance. He then falls from around 70 ft height on the ceiling of the first floor. Surat Girl Steals Jewellery Worth Over Rs 4 Lakh from Her Home to Help Boyfriend Repay Debt.

Neighbours alerted Mihir's family and the toddler was taken to a hospital. He had suffered serious injuries all over the body and succumbed immediately, Times of India reported. "In preliminary questioning, the family has informed that the minor was playing on his cycle inside the flat and may have ventured out finding the door open," an officer was quoted as saying.

"The family is yet to be questioned in detail as they were busy in rituals. Police will be recording their detailed statement once they recover from the shock," police said. A case of accidental death has been registered at the Katargam police station.

(The above story first appeared on LatestLY on Oct 02, 2021 12:43 PM IST. For more news and updates on politics, world, sports, entertainment and lifestyle, log on to our website latestly.com).