A girl allegedly stole jewellery worth Rs 4.10 lakh from her own home in Gujarat's Surat to help her boyfriend repay his debt. Her stepfather came to know about the incident and approached the police. The boyfriend has been arrested in the matter. 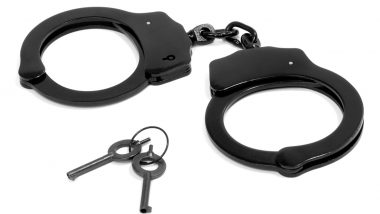 Gandhinagar, August 30: In a shocking incident, a 20-year-old girl allegedly stole jewellery from her own residence to help her boyfriend repay his debt amount, according to reports. The incident has been reported from Amroli area of Surat in Gujarat. Reports inform the the girl's step father came to know about her involvement in the alleged theft of jewellery from their home and approached the police regarding the same, when the duo, who had promised to return the stolen jewels failed to do so. The boyfriend has been arrested. Depressed Doctor in Surat Kills Mother, Sister by Injecting Heavy Dose of Anesthetic Drug; Later Tries To Kill Self.

According to reports, the accused girl, identified as Dhruti Dholakiya, had allegedly stole jewellery worth Rs 4.10 lakh from her own home in Surat's Amroli area in May this year and asked him to sell off the jewels in order to repay his loan worth around Rs 3 Lakh. Her step father identified as Kamlesh Chauhan, who had reportedly married her mother a few years back, came to know about the same. According to a report by the Times of India, Chauhan was assured by the accused duo that they would return the jewellery to him. Gujarat: 32-Year-Old Pregnant Woman Allegedly Kills Son, Later Jumps To Death in Surat; Investigation Launched.

However, the accused girl and her boyfriend failed to return the stolen jewlleery to her stepfather. Following this, Chauhan approached the police recently regarding the same. An investigation was launched and police has arrested the girl's boyfriend, identified as Vishal Bariya. Times of India quoted police in the report saying, The investigation has revealed that Dholakiya’s mother got married to Chauhan a few years ago. Meanwhile, Bariya had a debt of around Rs 3 lakh and to help him repay the debt Dholakiya stole the jewellery.

(The above story first appeared on LatestLY on Aug 30, 2021 12:08 PM IST. For more news and updates on politics, world, sports, entertainment and lifestyle, log on to our website latestly.com).