A day after a heart-wrenching video of a toddler playing with a shroud covering its dead mother at a railway station in Bihar’s Muzaffarpur surfaced, Rashtriya Janata Dal (RJD) leader Tejashwi Yadav on Thursday announced to give financial assistance of Rs five to the kids of the deceased woman. 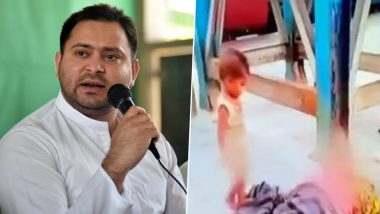 Patna, May 28: A day after a heart-wrenching video of a toddler playing with a shroud covering its dead mother at a railway station in Bihar’s Muzaffarpur surfaced, Rashtriya Janata Dal (RJD) leader Tejashwi Yadav on Thursday announced to give financial assistance of Rs five to the kids of the deceased woman.  Tejashwi Yadav said that the financial aid would be given in the form of a fixed deposit of Rs five lakh which both the children could withdraw after they become adult. Bihar Govt Issues Circular for Migrants Returning to State, Mandates Quarantine Camps for People Coming from 11 Districts.

The RJD leader also promised to give a job to the relative of the children if he or she takes care of them, including taking responsibility of their studies. Yadav said that the guardian of the kids would get a job in Katihar district. The RJD leader took to twitter to give this information. He tweeted, “The deceased woman Arbina Khatoon’s husband had already left her two years back. We will give Rs five lakh financial assistance to the kids of the woman so that they can use the FD after becoming adult. We will also give a job in Katihar district to the relative of the children who will take care of them. “ 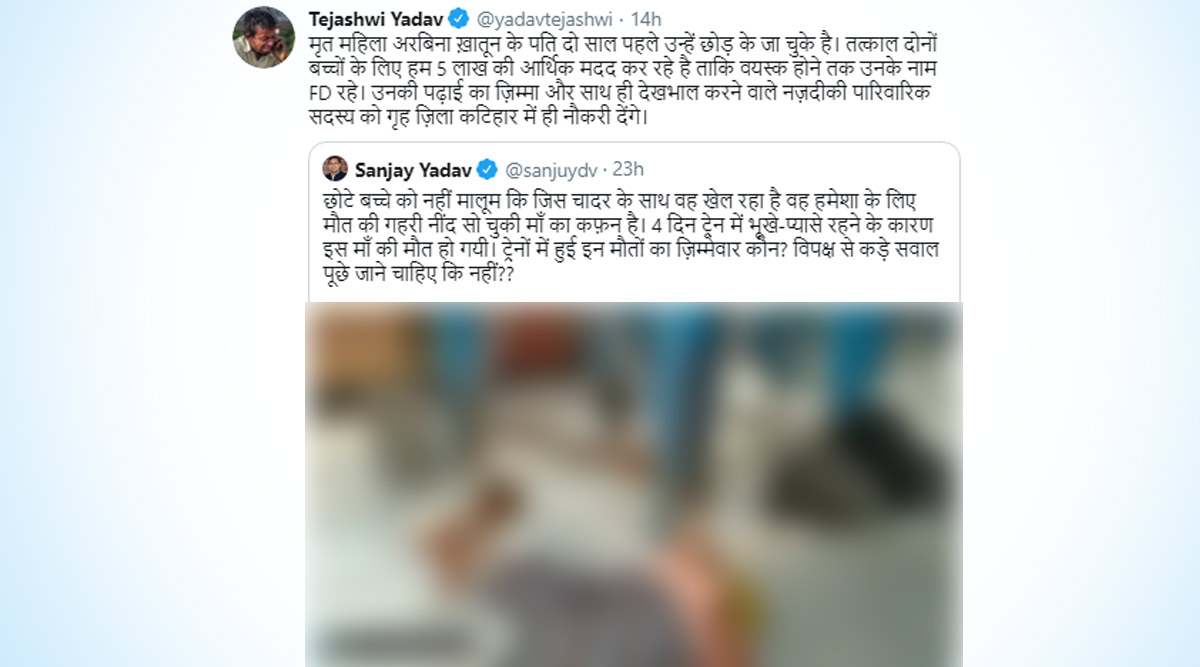 The video of the incident went viral of all the platforms of social media. The video shows the body of a 23-year-old woman lying on the platform. The deceased woman had boarded a Shramik special train from Gujarat on May 24.  In the video, it could be seen that the toddler tried to wake her mother up. According to reports, the woman had taken a train to Katihar with her sister, sister's husband and two children. On May 25, when the train was in Bihar, the woman collapsed and died reportedly of extreme heat, hunger and dehydration.

Horrific video on NDTV of a child trying to wake her mother who has passed away at a train station due to exhaustion/thirst/hunger. What are we being reduced to? pic.twitter.com/TNaMt2lBcv

However, the Press Information Bureau of Bihar denied the reports that the woman died due to hunger and termed the media claims as “misleading” and “incorrect”. In a tweet, the PIB, Bihar said that the woman was unwell even before boarding the train and she died due to the illness.

Migrant labourers are the worst affected due to the coronavirus lockdown and they lost their only source of income. After many migrant workers started to travel on foot to reach their hometowns in Uttar Pradesh Bihar,  the Indian Railways on May 1 announced to run Shramik Special trains to ferry migrant labourers to their native places. Till now, the government has run 3,600 home and transported almost 48 lakh migrants back home.

(The above story first appeared on LatestLY on May 28, 2020 10:30 AM IST. For more news and updates on politics, world, sports, entertainment and lifestyle, log on to our website latestly.com).