A heart-wrenching video of a toddler playing with a shroud covering its dead mother at a railway station has emerged on social media. 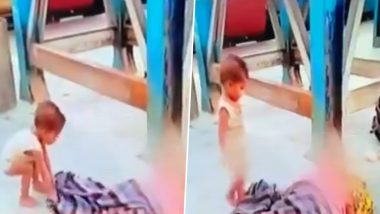 Muzaffarpur, May 27: A heart-wrenching video of a toddler playing with a shroud covering its dead mother at a railway station has emerged on social media. The video, which is going viral on social media platforms, is from a station in Bihar's Muzaffarpur. The video shows the body of a 23-year-old woman lying on the platform. The deceased woman had boarded a Shramik special train from Gujarat on May 24. Bihar Govt Issues Circular for Migrants Returning to State, Mandates Quarantine Camps for People Coming from 11 Districts.

The viral video shows the dead woman's child playing and trying to wake her until an older child dragged him away. According to reports, the woman had taken a train to Katihar with her sister, sister's husband and two children. On May 25, when the train was in Bihar, the woman collapsed and died reportedly of extreme heat, hunger and dehydration. The Ministry of Railways said after her death, her family members were asked to get off at Muzaffarpur station. COVID-19 Tally in India Cross 1.5 Lakh-Mark With 6,387 New Cases in Past 24 Hours, Death Toll Rises to 4,337.

The woman's family alleged that had been unwell on the train because of the lack of food and water, according to NDTV. Prior to the incident, a two-year-old child also died, reportedly from the heat and inadequate food at the same station in Bihar. Since Prime Minister Narendra Modi announced a nationwide lockdown on March 25 to contain the coronavirus spread in India, lakhs of migrants workers have been trying to reach their homes.

Horrific video on NDTV of a child trying to wake her mother who has passed away at a train station due to exhaustion/thirst/hunger. What are we being reduced to? pic.twitter.com/TNaMt2lBcv

According to the railways, 80 percent of total Shramik special trains are destined for various destinations in Uttar Pradesh and Bihar. As public and private transport services were suspended, many began their thousands-kilometre long journey on foot. Some managed to find cycles, auto-rickshaws or truck. The government is running Shramik special trains to transport migrants during the lockdown.

(The above story first appeared on LatestLY on May 27, 2020 03:35 PM IST. For more news and updates on politics, world, sports, entertainment and lifestyle, log on to our website latestly.com).