A 16-year-old student ended her life due to alleged physical harassment from her alcoholic father. The victim was a resident of Nandigama in Rangareddy district. 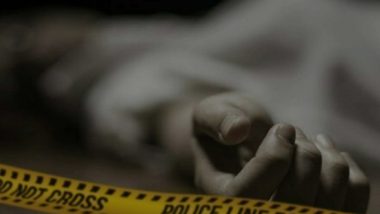 Hyderabad, May 25: A 16-year-old student ended her life due to alleged physical harassment from her alcoholic father. The victim was a resident of Nandigama in Rangareddy district.

According to TOI, the girl committed suicide on Sunday night by hanging herself at home when she was alone. The victim's father is a farm labourer.

According to Shadnagar ACP Kushalkar, the victim’s mother died due to ill health a year ago. “Before his wife's death, the accused used to harass her and their two children. He used to hit the children. After his wife’s death, the accused began torturing his children. The eldest child is a son and moved to the city to work in a shop and started staying at the same place to avoid his father,” the ACP said. Jammu and Kashmir Shocker: Woman Dies As Faith Healer Beats Her to Death, Arrested

The girl left a suicide note stating that she ended her life due to the torture. “We registered an abetment to suicide case against the accused and arrested him,” the ACP said.

In another shocking incident, a body of a woman was found inside a white sack that was dumped on the tracks of Mahim railway station . Police said that the age of the deceased woman was around 25-30 and she was a resident of the Dindoshi area in Mumbai. Cops suspect that the victim was murdered as her throat had been slit and there were several stabbing injuries on her stomach. After the body was discovered, a case of murder was registered and an accused was arrested by the Railway GRP. The accused was reportedly arrested from Goregaon. Mumbai Shocker: 28-Year-Old Woman’s Body Found Stuffed in Bag Near Railway Tracks in Mahim

The accused was the woman's acquaintance, and the two had an argument, following which the accused allegedly killed the woman and dumped her along the Mahim track.

(The above story first appeared on LatestLY on May 25, 2022 03:19 PM IST. For more news and updates on politics, world, sports, entertainment and lifestyle, log on to our website latestly.com).