While the Indian Ocean Tsunami Warning and Mitigation System has issued a tsunami warning for the region, the European-Mediterranean Seismological Centre has ruled out the possibility of it. 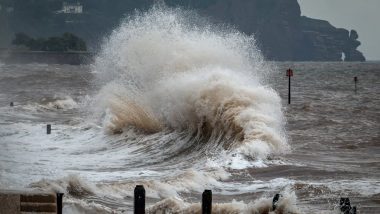 After the 6.1 magnitude quake hit the coast of Timor, the US Geological Survey confirmed that there were no reports of damage. It also said that the earthquake struck at a depth of 51.4 km (32 miles) off the eastern tip of Timor Island. Interestingly, the area lies between East Timor and Indonesia. Russia-Ukraine War: Some 1,500 Killed in Sievierodonetsk, Says Mayor Oleksandr Stryuk.

East Timor, which is also known as Timor-Leste, is an island nation. It has Indonesia on the north and Australia on the south. As per experts, East Timor and Indonesia, both sit on the Pacific Ring of Fire, which is an arc of intense seismic activity that stretches through Southeast Asia and across the Pacific basin. This means, East Timor is prone to earthquakes.

Earthquake "may be capable of generating a tsunami

#UPDATE A 6.1-magnitude earthquake has struck off the eastern tip of East Timor, the US Geological Survey says.

A tsunami advisory group said the earthquake "may be capable of generating a tsunami affecting the Indian Ocean region" pic.twitter.com/0DjaMtR0vr

The Indian Ocean Tsunami Warning and Mitigation System (IOTWMS) has also issued a tsunami warning for the region. However, the European-Mediterranean Seismological Centre (EMSC) has ruled out the possibility of a tsunami. The IOTWMS has also urged the emergency management personnel to evacuate the entire tsunami threat zone.

In case of a Tsunami threat, local officials have to take appropriate measures such as evacuating low-lying coastal regions and moving ships to deeper waters when it is safe to do so.

(The above story first appeared on LatestLY on May 27, 2022 02:39 PM IST. For more news and updates on politics, world, sports, entertainment and lifestyle, log on to our website latestly.com).