Diesel Price in Delhi Cut by Rs 8.36 Per Litre as Arvind Kejriwal Govt Reduces VAT From 30% to 16.75% to Strengthen Delhi's Economy And Give Relief to People 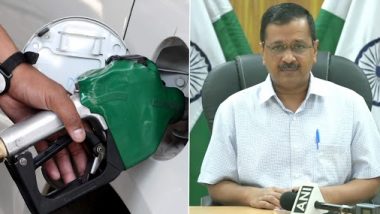 New Delhi, July 30: Delhi Chief Minister Arvind Kejriwal on Thursday decided to reduce the value-added tax (VAT) on diesel from 30 percent to 16.75 percent.  Much to the relief of residents of the national capital, the reduction in VAT on diesel will lower the diesel prices in Delhi. With the latest development, the price of diesel in Delhi will reduce from Rs 82 to Rs 73.64 i.e. by Rs 8.36 per litre, Kejriwal announced. The VAT is a consumption tax placed on a product whenever value is added at each stage of the supply chain, from production to the point of sale.

People in Delhi have witnessed frequent hike in the prices of petrol and diesel in the last few months, 23 times in June alone. Earlier this month, petrol pump owners in the national capital had urged the AAP government in Delhi to reduce VAT on petroleum products, citing lower rates in neighbouring states. According to reports, in June, the drop in diesel sales in Delhi was 64 percent as compared with the national average of drop of 18 percent. The drop would certainly result in loss of revenue of more than Rs 380 crore, reports said.  Petrol, Diesel Prices Hiked in Delhi on May 5 as Delhi Government Increases VAT.

(The above story first appeared on LatestLY on Jul 30, 2020 12:21 PM IST. For more news and updates on politics, world, sports, entertainment and lifestyle, log on to our website latestly.com).