Yes Bank has devised a plan to get rid of non-performing branches and ATMs. According to reports, the private sector bank is also planning to reduce office space by moving to a revolving desk layout. The aim of the bank is to save money and to increase its profit. 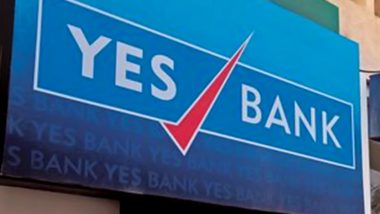 New Delhi, October 26: Yes Bank has devised a plan to get rid of non-performing branches and ATMs. According to reports, the private sector bank is also planning to reduce office space by moving to a revolving desk layout. The aim of the bank is to save money and to increase its profit.

Yes Bank is renegotiating contracts with vendors, landlords and contractors, as it seeks to cut costs and save up to Rs 600 crore, reported The Economic Times. In the second quarter, the bank converted 35 rural branches into low-cost business correspondent centres.

The move to convert rural branches into correspondent centres along with measures like digitisation and renegotiating contracts with vendors helped the ban in reducing total operating expenses by 21 percent. Yes Bank PMLA Case: ED Attaches Over Rs 2,200 Crore Assets of Rana Kapoor and Others.

“We have identified 50 more branches to merge to ultimately reduce them by 25. We are also preparing a work-from-home model that will free up office space and help us save on rentals. We have identified a revolving desk where employees can come and work,” reported media house quoting Chief Executive Prashant Kumar as saying. Notably, this year, bank’s cost to income ratio has been reduced to 49.3 percent. ICICI Lombard Announces Bancassurance Tie-Up With Yes Bank to Make Insurance More Accessible to Customers.

Kumar was asked to lead Yes Bank in March after its rescue by a SBI-led consortium of lenders after alleged governance lapses under co-founder and chief executive Rana Kapoor. It will be shutting down 50 branches as part of a rationalisation effort, which will reduce its overall network in FY21 as there will be no new openings, Kumar said. The chief executive of the bank added that the over Rs 9,000 crore of stressed assets identified this fiscal year by the bank are due to the COVID-19 Pandemic and do not include any legacy accounts.

He said many branches are located too close to each other or are not financially viable. Automated teller machine (ATM) network is also being rationalised. The bank will go back to network expansion in FY22, but the size of a branch will be much smaller than the current size, Kumar said, adding that the idea is to leverage the digital offerings to reduce dependence on branches.

(The above story first appeared on LatestLY on Oct 26, 2020 03:56 PM IST. For more news and updates on politics, world, sports, entertainment and lifestyle, log on to our website latestly.com).