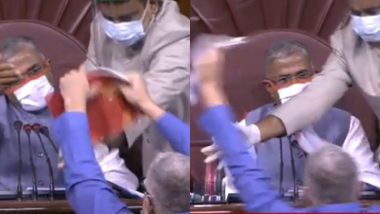 New Delhi, September 20: Amidst the heated debate over the contentious farm bills, introduced by the Union government in the Rajya Sabha on Sunday, Trinamool Congress MP Derek O'Brien entered the well and showed the House rule book to Rajya Sabha Deputy Chairman Harivansh. He was opposing the bill and wanted the government to send the farm bills to be sent to a select committee.

Earlier, while opposing the farm bills in Rajya Sabha, Derek had said, "The Prime Minister said that the opposition is trying to mislead the farmers. You promised to double the farmers' income by 2020. At the current rate, it won't happen before 2028."

Citing his concerns on MSPs, O'Brien said, "Don't bring the debate down to MSPs; we are opposing everything in the Bills. The Centre doesn't have the right to implement these in the states. The states will not be able to ensure farmers' interests. Who are you going to fool here? For the consumers too, what's the protection? These Bills will have to be discussed and debated."

(The above story first appeared on LatestLY on Sep 20, 2020 02:16 PM IST. For more news and updates on politics, world, sports, entertainment and lifestyle, log on to our website latestly.com).