Azadi Battle Between Congress and BJP on Twitter; Watch Videos of Two Political Versions Of The 'Gully Boy' Song

The song's composer Dub Sharma recently said that people are open to interpret the song the way they want to, but the real context will be out when the film releases. 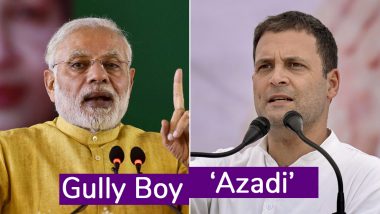 Mumbai, February 9: Trust politicians and political parties to cash upon every ongoing trend in order to garner voter's attention. Now, the Congress and the Bharatiya Janata Party (BJP) have declared the 'war of azadi' on each other on Twitter. The 'Azadi' song, which came in spotlight after former JNUSU president Kanhaiya Kumar was booked for sedition for an alleged anti-national slogan he made in JNU in the year 2015-16, acquired all together a new dimension after rapper Divine produced his own version of the song. And now, when the song has become a part of the movie Gully Boy, the Congress party used it to attack Prime Minister Narendra Modi and the BJP government. Gully Boy Trailer: From Angry Rap Battles to Family Drama, Ranveer Singh and Alia Bhatt's Film Looks Arresting - Watch Video.

Not one to be left behind, the BJP also made a video on same song attacking Rahul Gandhi and Congress for the various ills in the society. This Video of ‘Gully Boy’ Ranveer Singh Asking Fans to Disturb Hospital Peace and Insulting Mumbai Police Is Going Viral!

First, catch the Congress' 'Azadi' video which the grand old party used in order to corner the BJP led government.

As can be seen in the video, the Congress has used every option available to it from the alleged Rafale deal wrongdoings to 'Chowkidar Chor Hai' jibe. Both Mukesh Ambani's Jio and Anil Ambani also feature in the Congress' Azadi video version. Besides, the video ends with Rahul Gandhi making an impassioned speech at the end saying that the BJP and PM Narendra Modi are 'darpok' (coward). Even Nirav Modi features in the video with the Congress using the photograph where PM Modi is seen with Nirav Modi in a frame along with many other businessmen. Rahul Gandhi Challenges Narendra Modi For a 10-Minute Debate, Says 'PM Will Run Away As He Is Coward', Watch Video.

While @RahulGandhi will stay up all night wondering what new lies to peddle tomorrow morning, we leave you with this goal for 2019.

The BJP has put the issue of dynasty politics at the core of its reply to Congress in its Azadi video and has specially targeted Rahul Gandhi and the Gandhi family. The video also makes a comment on Robert Vadra, who is facing ED questioning for alleged wrongdoings. Interestingly, though several scams are also attributed to the Congress party, the central point of attack for the BJP is Congress' dynasty politics. Even Priyanka Gandhi, who was recently made the AICC General Secretary for East UP, features in the BJP's video. Priyanka Gandhi Officially Enters Active Politics, Appointed Congress General Secretary for UP East Ahead of Lok Sabha Elections 2019.

Talking about the Azadi song in the film Gully Boy, the song is reminiscent of either the demand for 'Azadi' in Kashmir or of former JNU Union president Kanhaiya Kumar's use of the alleged anti-national 'azadi' slogan. The song's composer Dub Sharma recently said that people are open to interpret the song the way they want to, but the real context will be out when the film releases. Another song from the film Gully Boy 'Apna Time Aayega' became extremely popular for its appeal to the youth regarding a brighter future. The real winner in this battle for 'Azadi' seems to be the film Gully Boy and Bollywood, for the moment.

(The above story first appeared on LatestLY on Feb 09, 2019 04:13 PM IST. For more news and updates on politics, world, sports, entertainment and lifestyle, log on to our website latestly.com).