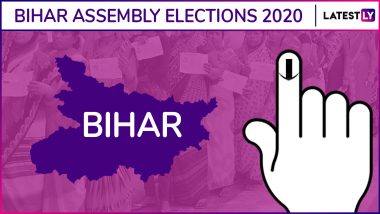 Patna, November 10: The counting of votes is underway for the Bihar assembly elections 2020, with the results being expected to be declared later in the day. Candidates of all political parties and electorate of the seats from where they contested the elections, are keenly awaiting the outcome. The party-wise and seat-wise list of candidates below would be updated live as soon as the trends and results emerge. Bihar Assembly Election 2020 Result: What Time Will Counting Begin? When Will First Trends And Final Results be Out? Here's All You Need to Know.

The voting for 243-seat Bihar Assembly took place in three phases on October 28, November 3 and 7. The main competition was between Mahagathbandhan, comprising the Rashtriya Janata Dal (RJD), the Congress and Left parties, and the Bharatiya Janata Party (BJP)-led National Democratic Alliance (NDA). Nitish Kumar's Janata Dal-United (JDU) is part of the NDA. Bihar Assembly Election Results 2020: From Congress, RJD to JDU, A Look Back at Outcome of All Vidhan Sabha Polls in the State Ahead of Counting Day.

The Congress, a part of the Mahagathbandhan alliance in Bihar, contested on 70 out of the 243 seats. As per the seat-sharing pact finalised, the RJD fielded its candidates on 144 constituencies, and the Left Front comprising CPI, CPI(M) and CPI-ML fielded their candidates in 29 assembly seats.In a major setback for Nitish Kumar, several exit polls predicted a thumping victory for Mahagathbandhan. This time, the NDA will find it difficult to retain power. Meanwhile, Chirag Paswan's Lok Janshakti Party (LJP) contested these elections alone. The term of Bihar assembly will end on November 29.

The saffron party contested on 110 seats, while the JDU fielded its candidates on 115 seats. According to the seat-sharing formula, Vikassheel Insaan Party (VIP) and Jitan Ram Manjhi's Hindustani Awam Morcha (HAM) were also added in the alliance and contested on 11 and seven seats respectively.

(The above story first appeared on LatestLY on Nov 10, 2020 08:30 AM IST. For more news and updates on politics, world, sports, entertainment and lifestyle, log on to our website latestly.com).