According to the latest trends, the saffron party is on the course of scripting a historic win with over 150 seats, a feat that even Narendra Modi failed to achieve. 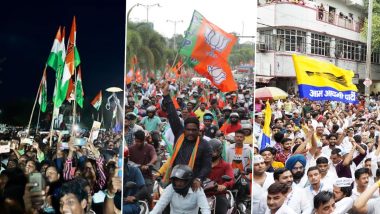 Ahmedabad, December 8:  The Gujarat Assembly Election 2022 was fought between three main contenders - BJP, Congress, and the AAP. Gujarat has been a stronghold of the BJP for 27 years. The Bhartiya Janata Party has taken a massive lead over the grand-old party and the new entrant AAP in the Gujarat Assembly Polls 2022.

According to the latest trends, the saffron party is on the course of scripting a historic win with over 150 seats, a feat that even Narendra Modi failed to achieve. The BJP will be continuing its winning streak for the seventh term. Bhartiya Janata Party's win can be attributed to its strong management, campaigns, and of course, the Modi wave. Gujarat Assembly Election Result 2022 Live News Updates: BJP Extends Lead to 150 Seats; Congress Ahead in 19, AAP 9.

BJP Heads Towards Historic Win With Lead in Over 150 Seats:

As BJP is on its way to clinching a landslide victory, the AAP is striving to make inroads in the BJP stronghold. Arvind Kejriwal-led party however failed to grab even 10 seats. The party is leading in less than 10 seats with its chief ministerial candidate Isudan Ghadvi trailing. Congress, which has been out of luck in the Assembly polls, is leading in less than 30 assembly seats. Himachal Pradesh Assembly Election Result 2022: Congress and BJP in Neck-And-Neck Fight in Hilly State.

The votes polled in the Gujarat Assembly Election 2022 are being counted today, December 8 by the Election Commission of India (ECI). The voting for Gujarat Assembly Election 2022 was held in two phases on December 1 and 5. The Gujarat Election Result 2022 would be declared as soon as the counting of votes is done for the 182-member Assembly. The counting of votes started at 8 am and the Gujarat Election Result 2022 will be declared today.

(The above story first appeared on LatestLY on Dec 08, 2022 10:38 AM IST. For more news and updates on politics, world, sports, entertainment and lifestyle, log on to our website latestly.com).