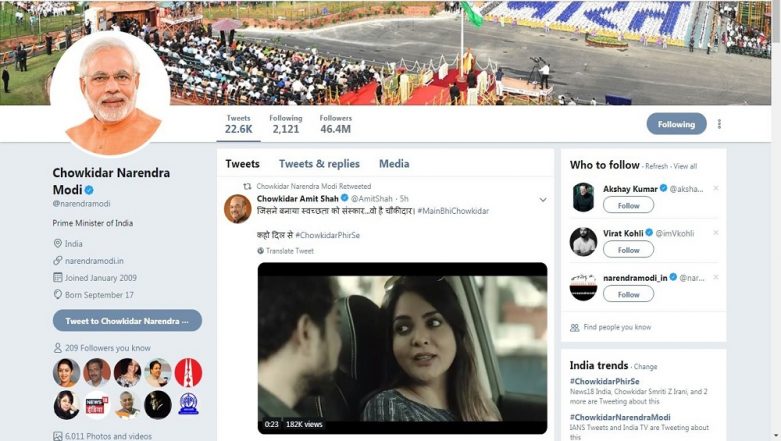 A day after launching the "Main Bhi Chowkidar (I am a watchman too)" campaign on social media, Prime Minister Narendra Modi on Sunday changed the title of his Twitter account to "Chowkidar Narendra Modi". (Photo Credits: IANS)

Mumbai, March 18: The Maharashtra Congress on Monday urged the Election Commission of India to act against Prime Minister Narendra Modi for the Bharatiya Janata Party's latest campaign, 'Main Bhi Chowkidar', an office-bearer said. In a letter to the ECI, the state party secretary Taufiq Mullani has said that in the video of the new campaign - which is viral on social media - Modi has been shown riding on an Army tank, and interspersed with clips of the Indian soldiers fighting.

The party pointed out that on one hand, Congress President Rahul Gandhi stood solidly behind the government in the wake of the Pulwama attacks, on the other, the BJP is "taking credit for the sacrifices of the soldiers and exploiting it politically during elections" through the Main Bhi Chowkidar' campaign.