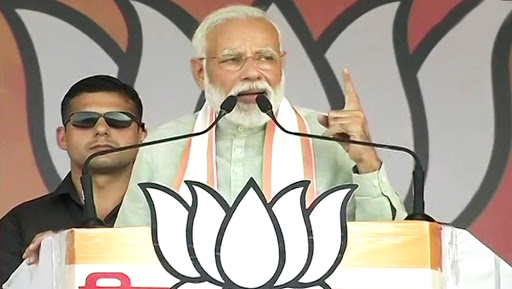 Balia, May 14: Prime Minister Narendra Modi on Tuesday accused the Samajwadi Party (SP), BSP and the Congress of backing terrorists and Pakistan. Addressing an election rally here, Modi said his government's policies were aimed at making India a strong country. "I've succeeded in my efforts to a great extent. But opportunists have been united in opposing me and my work. I believe that if I have the support of the people, I will reverse all their attempts."

He asked the gathering if they had ever heard the SP, the Bahujan Samaj Party (BSP) or the Congress speak about terrorism or criticise Pakistan. They "only support terrorists and the neighbouring country", he said. Modi also accused the opposition parties of rampant corruption. "This gang of adulterated parties has made illegal money and amassed both legal and illegal property. Their politics is only about erecting lavish bungalows for themselves and for their relatives. Narendra Modi's Statement About 'Effect of Clouds on Radar Signals from Aircraft During Balakot Strike' Deleted By BJP Twitter Handles After Backlash; Watch Video.

"And they have been forced to gang up together now that the investigating agencies are after them," roared the Prime Minister. According to him, whether it was the SP, the BSP or the Congress, all that they did was to abuse him. "Not a day goes when the leaders of these parties don't abuse me. And that's because of the frustration building after six phases of polling. They can foresee their defeat. But I take their abuse as a compliment," he said.

Earlier in Buxar, Modi asserted that the Bharatiya Janata Party (BJP) and its allies were set to win the ongoing Lok Sabha elections. "One thing is clear. Our victory is certain (Jeet to nishchit hai)," he told an election meeting to applause from the crowd.

Modi said people had given the mandate for his government again in the six rounds of elections completed so far. "Opposition leaders have lost all hope. Their anger is at a high level and they are abusing Modi." He appealed to the people to vote for Union Minister Ashwani Choubey, the BJP candidate from Buxar.