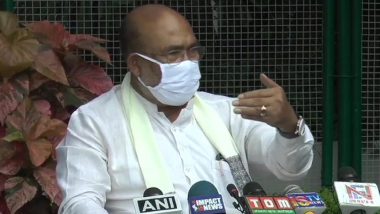 The advisor to the Chief Minister, Rajat Sethi, said in a tweet: "Devious plans of the Congress to destabilise the government have failed. Congrats CM." The crucial one-day session of the Manipur Assembly was called on Monday to decide on the confidence motion moved by the Chief Minister. Manipur Crisis: Meghalaya CM Conrad Sangma, Assam Minister Himanta Biswa Sarma Reach Imphal, Seek to Patch Up With State NPP MLAs.

The spokesperson of the Opposition Congress in Manipur, Ningombam Bupenda Meitei, said that instead of accepting the no-confidence motion moved by the Congress, the Manipur Assembly has accepted the motion of confidence moved by the BJP government.

The ruling coalition and the main opposition Congress had issued separate whips to their members to attend the Assembly on Monday and vote following their respective party lines.

A noisy scene was witnessed in the House after the BJP-led alliance won the confidence motion.

The Manipur government had plunged into a serious political crisis on June 17 after the four-member National People's Party (NPP), the sole Trinamool Congress MLA, and an Independent MLA withdrew their support while three BJP MLAs quit the party and joined the Congress.

The effective strength of the Manipur assembly is 53, including Speaker Y. Khemchand Singh, following the disqualification of four members, including former minister Th Shyamkumar and the resignation of three BJP MLAs.

The disqualification of Trinamool Congress legislator T. Robindro by the Speaker was stayed by the Manipur High Court.

In the 2017 Assembly elections, the had Congress emerged as the single largest party securing 28 seats, but the BJP, which bagged 21 seats, stitched a coalition government with the support of four NPP MLAs, four Naga People's Front MLAs, the lone TMC MLA and an Independent member.

Seven Congress MLAs also joined the BJP subsequently. Demanding the disqualification of the seven MLAs, the Congress had in January this year filed a petition in the Supreme Court, which had asked the Speaker to take appropriate steps.

(The above story first appeared on LatestLY on Aug 10, 2020 10:18 PM IST. For more news and updates on politics, world, sports, entertainment and lifestyle, log on to our website latestly.com).