Expressing concern after India's GDP growth rate came down to 5 percent in the first quarter, Manmohan Singh said the country going through "a prolonged slowdown". "The state of the economy today is deeply worrying," said Singh. 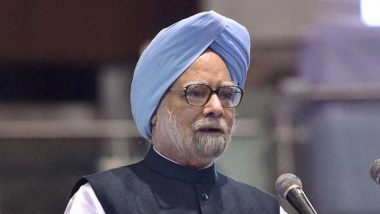 New Delhi, September 1: Former Prime Minister Dr Manmohan Singh on Sunday blamed "mismanagement" by the Modi government for the economic slowdown. Expressing concern after India's GDP growth rate came down to 5 percent in the first quarter, Manmohan Singh said the country going through "a prolonged slowdown". "The state of the economy today is deeply worrying," said Singh, who is known as the architect of economic reforms. Subramanian Swamy Hits Out at Narendra Modi Govt as GDP Numbers Plunge, Says 'Get Ready to Say Good-Bye to $5-Trillion Economy'.

"Last quarter's GDP growth rate of 5 percent signals that were in the midst of a prolonged slowdown. India has potential to grow at a much faster rate but all-round mismanagement by Modi government has resulted in this slowdown," Singh said. A severe slowdown in manufacturing activity in the country brought down India's GDP growth rate in the first quarter (Q1) to 5 percent, marking the fourth successive quarter of decline in growth on the trot.

"It is particularly distressing that the manufacturing sector's growth is tottering at 0.6 percent. This makes it very clear that our economy has not yet recovered from the man-made blunders of demonetisation and a hastily implemented GST," Singh, who was also the Finance Minister of the country from 1991 to 1996 in the then Narasimha Rao government, said. The Congress's Rajya Sabha MP said the country cannot afford the declining growth rate. Nirmala Sitharaman Announces Measures to Boost Indian Economy Amid Slowdown, Rolls Back Surcharge on FPIs, Removes Angel Tax on Start-Ups.

"Therefore, I urge the government to put aside vendetta politics and reach out to all sane voices and thinking minds to steer our economy out of this man-made crisis," Singh said. Earlier, the Congress party hit out at the Modi government after it released India's GDP numbers for the first quarter of the current fiscal, saying it was pre-occupied in "shoddy headline" management and "cover-up job", instead of addressing the structural issues ailing the economy.

From 8 per cent in Q1 of 2018-19 to 5 per cent in this quarter, the GDP has fallen by 3 per cent in barely a year. Congress General Secretary Priyanka Gandhi Vadra also slammed the Modi government, saying that it has deflated the economy.

(The above story first appeared on LatestLY on Sep 01, 2019 10:47 AM IST. For more news and updates on politics, world, sports, entertainment and lifestyle, log on to our website latestly.com).