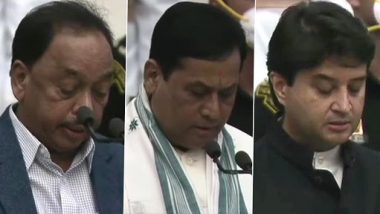 The prominent names who took the oath today include Jyotiraditya Scindia, Sarbananda Sonowal, Narayan Rane,  Hardeep Singh Puri, Anurag Thakur who may be part of the massive reshuffle of the Union Cabinet. Modi Cabinet Reshuffle Live Streaming: Watch Live Updates on Cabinet Expansion and Swearing In Ceremony of Newly-Inducted Ministers.

Cabinet Reshuffle: List Of Ministers  Who Have Taken Oath Today:

A slew of resignations came up ahead of the Cabinet reshuffle. The reshuffle is being synchronized with the exits of several top brass ministers including Health Minister Harsh Vardhan, Education minister Ramesh Pokhriyal Nishank, Union minister of state Babul Supriyo, Labour Minister Santosh Gangwar,  Minister for chemical and fertilizers Sadananda Gowda, Minister of State for Health and Family Welfare Ashwini Kumar Choubey among others.

Reports inform that as many as 24 new faces were inducted in the Modi government, the first big reshuffle of Modi 2.0.As many as 43 members are all set to take oath in Prime Minister Modi's new cabinet which will be one of the most inclusive with record representation of SC, ST members. The list of names of the ministers who have taken the oath today includes Jyotiraditya Scindia, Pashupati Kumar Paras, Bhupender Yadav, Anupriya Patel, Shobha Karandlaje, Meenakshi Lekhi, Ajay Bhatt, Anurag Thakur among others. Check Full List of Names of Ministers Here.Earlier in the day, the ministerial probables had assembled at Lok Kalyan Marg as Prime Minister Narendra Modi addressed them before the oath-taking ceremony. Harsh Vardhan Quits as Health Minister, Ramesh Pokhriyal Nishank Resigns Ahead of Modi Cabinet Reshuffle; Here's Who All Have Resigned.

(The above story first appeared on LatestLY on Jul 07, 2021 06:16 PM IST. For more news and updates on politics, world, sports, entertainment and lifestyle, log on to our website latestly.com).