Former Congress Member of Parliament (MP) Priya Dutt on Monday announced that she would not be contesting 2019 Lok Sabha elections. 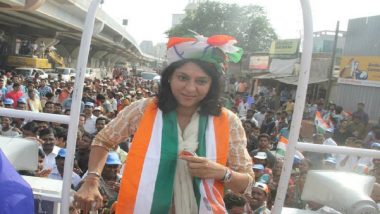 Mumbai, January 7: Former Congress Member of Parliament (MP) Priya Dutt on Monday announced that she would not be contesting 2019 Lok Sabha elections. While speaking to news agency ANI, Dutt said, “These past years have been exciting and enlightening for me. However, I struggled to keep a balance b/w my personal and political life. While I did my best and managed, it took a toll on many aspects of my life.” Sanjay Nirupam Goes on Twitter Rant Over Heavy Police Deployment Outside His House, Questions Why Today as Amit Shah Visits Mumbai to Meet Uddhav Thackeray.

The former Congress MP represented Mumbai North-Central constituency twice. However, in 2014 Lok Sabha elections she was defeated by Bharatiya Janata Party (BJP) candidate Poonam Mahajan. In an official statement issued on Monday, Dutt said, “This constituency never belonged to my father, to me, or for that matter to any one person; it belongs to the people who make it. We come in and are chosen by the people as caretakers and must give an opportunity for fresh and new ideas.” Nirmala Sitharaman Has Demolished Congress' Lies on Rafale, Says Amit Shah.

The Former Congress MP stated that she wants to spend more time with her two sons. Dutt’s father and actor late Sunil Dutt earlier won from the same constituency. In 2005, following her father’s death, the former Congress MO won the seat.  However, in October 2018, Dutt was removed from the post of All India Congress Committee (AICC) secretary.

(The above story first appeared on LatestLY on Jan 07, 2019 09:45 PM IST. For more news and updates on politics, world, sports, entertainment and lifestyle, log on to our website latestly.com).