For the Punjab Assembly Elections 2022, the party announced Member of Parliament (MP) Bhagwant Singh Mann, who is also a popular Sikh face as its chief ministerial candidate. 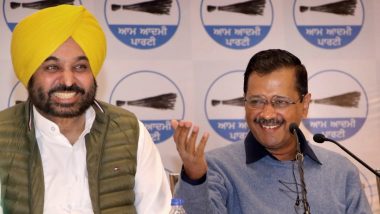 Punjab looks set to welcome a fresh government as results pour in for Assembly Elections 2022. As per the trends, the Aam Aadmi Party (AAP) is set for a massive win in Punjab, decimating the ruling Congress party. The latest trends indicate the AAP winning 90 seats in Punjab, way beyond the half-way mark in the state's 117-seat Assembly.

As per the Election Commission of India (ECI), the Aam Aadmi Party has crossed the majority number of 59 in Punjab and is currently leading on 89 seats, while the Congress and BJP are leading on 12 and 5 seats respectively.

Official trends for all 117 seats in Punjab - AAP leading in 89 seats, Congress in 12 seats and BJP leading in 5 seats pic.twitter.com/pA5Cfwg2rm

Here's a look at the rise of the Aam Aadmi Party in Punjab:

AAP, which has always been seen as a new entrant in Punjab's political circles had a meteoric growth during the 2017 Assembly Elections. It emerged as the second-largest party by winning 20 seats out of the 117 seats in Punjab. However, AAP failed to make a name for itself as the party did not announce a chief ministerial candidate in 2017.

This year, the AAP, which was contesting a multi-cornered fight with SAD, BJP, and Congress, did not repeat the same mistake. For the Punjab Assembly Elections 2022, the party announced Member of Parliament (MP) Bhagwant Singh Mann, who is also a popular Sikh face, as its chief ministerial candidate.

Another reason for AAP's steep rise in Punjab is its successful model of Delhi governance. The party's achievements in areas such as health, education, infrastructure, civic amenities, and services for the poor also sparked growth for them among the people of Punjab.

Amid all this, the growing problems in Punjab including the year-long farmers' protest and the ousting of Captain Amarinder Singh as Punjab CM also opened the doors for the Arvind Kejriwal-led party.

The most important factor that led AAP to a landslide victory in this year's Punjab Assembly Elections is their election manifesto where the party promised to improve the conditions of government hospitals and schools. While the other parties ignored the problems plaguing the state, AAP focused on ground-level issues such as unemployment, corruption-free government, and farmers' agitation.

With AAP now emerging as a dominating party in Punjab, it will be interesting to see if the party will now start making inroads in Himachal Pradesh, the hill state that joins Punjab.

(The above story first appeared on LatestLY on Mar 10, 2022 11:33 AM IST. For more news and updates on politics, world, sports, entertainment and lifestyle, log on to our website latestly.com).