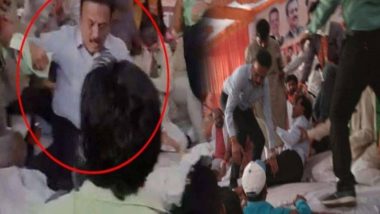 Screenshot of the video.

Reports from various agencies state that clash erupted after the supporters BJP district president Uday Wagh allegedly thrashed the former BJP MLA BS Patil with shoes and sandals. Though the allegations can't be proved as of yet, the police are investigating the matter.

There are few reports with saying that the BJP had previously given the party LS ticket to Smita Wagh, but due to controversy, Unmesh Patil was made the candidate.

(The above story first appeared on LatestLY on Apr 10, 2019 10:46 PM IST. For more news and updates on politics, world, sports, entertainment and lifestyle, log on to our website latestly.com).