Subramanian Swamy, Modi Govt Widely Differ as Economic Crisis Deepens: Here's How The Ex-FM Has Critiqued The Handling of Economy So Far 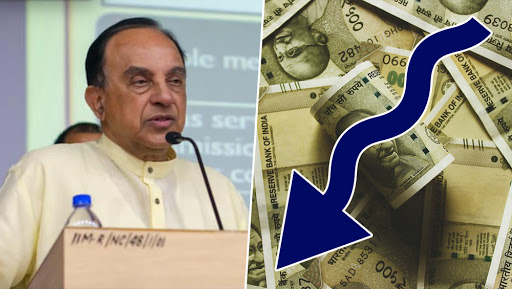 New Delhi, September 5: Days after hitting out at Prime Minister Narendra Modi-led Union government on the declining Gross Domestic Product (GDP) rate, Bharatiya Janata Party Rajya Sabha MP Subramanian Swamy on Thursday again attacked his party, but this time it was amalgamated with a cautionary message. Daring the government to implement bold incentivising reform package, Swamy opined that an upward GDP growth 10 percent per year is not impossible. Here's how the former Finance Minister had critiqued the ruling dispensation in the last couple of days. Subramanian Swamy Hits Out at Narendra Modi Govt as GDP Numbers Plunge, Says 'Get Ready to Say Good-Bye to $5-Trillion Economy'

Setting his tone straight and direct, the Rajya Sabha parliamentarian asserted that the Union government could turn the reverse economic downfall and turn it to an upward GDP growth 10 percent per year. But for that, it (the government) need to take bold incentivising reform package. Swamy also opined that time has arrived for concrete action, rather than complicating it.

Expressing his thoughts on the above issue, Swamy took to Twitter and posted:

India’s current economy can be turned around to upward GDP growth 10% per year if Govt implements bold incentivising reform package. For every month of MoF spin it will become harder and harder. Time for action—Now!

This is not the first time he had attacked the ruling dispensations on the GDP rate, which fell to 5 (five) percent) in August. Without bothering about the high-command's comments, Swamy on Saturday slammed BJP government for its lack of 'boldness' and 'knowledge' for a new economic policy. He mentioned that to improve the Indian economy, teh government needs both pieces of knowledge for a new economic policy soon. Shiv Sena Backs Manmohan Singh's Criticism on Indian Economy, Asks Narendra Modi Govt to Heed Advice

Get ready to say good bye to ₹ 5 trillion if no new economic policy is forthcoming. Neither boldness alone or knowledge alone can save the economy from a crash. It needs both. Today we have neither

Not only Swamy, but BJP's political ally in Maharashtra -- Shiv Sena -- on Wednesday also advised the Narendra Modi government to pay heed to the ex-PM Dr Manmohan Singh's advice. Party chief Uddhav Thackeray mentioned that Dr Singh's expertise should be sought and a collective strategy must be formulated to tackle the economic crisis. Manmohan Singh Blames 'Mismanagement' by Modi Government For Economic Slowdown, Urges Centre to Shun Vendetta Politics