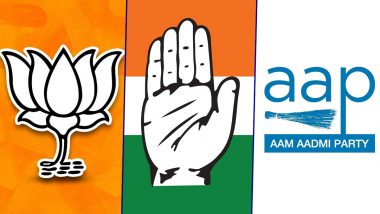 Ahmedabad, November 30: Surat North, Valsad, Mandvi, Abdasa, Limbdi and 177 other constituencies of the Gujarat state will go to polls in two phases in December. The Gujarat assembly election results 2022, including the outcomes of Surat North, Valsad, Mandvi, Abdasa, and Limbdi assembly seats, will be declared with the Himachal Pradesh assembly election results on December 8.

This year, the Gujarat assembly election 2022 will witness a triangular battle between the Bharatiya Janata Party (BJP), Congress, and the Aam Aadmi Party (AAP) with other smaller parties also in the fray. As the coastal state goes to poll starting December 1, we take a look at Surat North, Valsad, Mandvi, Abdasa, and Limbdi assembly seats past polling results, polling dates and other details. Lathi, Jasdan, Khambhalia, Porbandar, Talala Elections 2022: Check Electoral History, Polling and Result Date of the Gujarat Assembly Seats.

The Surat North constituency, which is part of the Surat district is one of the 182 legislative assembly constituencies of Gujarat state which went to poll on December 1 in the recently concluded assembly elections. In the 2017 assembly elections, the Surat North seat was won by BJP's Balar Kantibhai Himmatbhai, who defeated Congress candidate Kachhadiya Dineshbhai Manubhai with a margin of 20022 votes. This time once again, the BJP has fielded sitting MLA Kantibhai who will be pitted against AAPs Mahendra Navadiya and Congress' Ashokbhai V Patel. Will the sitting MLA win Surat North again or will AAP surprise the saffron and Congress party. We will know on December 8.

This year, the Valsad assembly seat went to polls on December 1 and witnessed a three way battle between the BJP, Congress and the AAP. This year, BJP has laid its trust in sitting MLA Bharatbhai Kikubhai Patel, who had defeated Congress leader Tandel Narendrakumar Jagubhai with a margin of over 43,000 votes. Patel will face a direct challenge from AAPs Raju Marcha and Congress candidate Kamlkumar Shantilal Patel. Will BJP retain the Valsad seat, which has been its bastion since 2012? Ghatlodia, Bhavnagar Rural, Majura, Viramgam, Vadgam Elections 2022: Check Electoral History, Polling and Result Date of the Gujarat Assembly Seats.

The Mandvi constituency, which falls under the Kuchchh district went to polls on December 1 in the recently concluded Gujarat assembly elections. This year, the Mandvi seat will witness a three-cornered fight between BJP, Congress and AAP. In the 2017 assembly elections, BJP leader Jadeja Virendrasinh Bahadursinh defeated Congress candidate Gohil Shaktisinhji Harichandrasinhji by a margin of over 9046 votes. This year, BJP has denied ticket to Jadeja and instead fielded Anirudhh Bhailal Dave against AAPs Kailash Gadhvi and Congress' Rajendrasingh Jadeja. Will BJP retain Mandvi or will the constituency see a new party as its administrators? We will come to know on December 8.

The coastal state of Gujarat went to poll in two phases. Meanwhile, the Abdasa constituency went to polls on December 1. This year, BJP has fielded sitting MLA Jadeja Pradhyumansinh Mahipatsinh, who defeated Congress leader Dr. Shantilal Senghani by a margin of 36 votes in the 2022 assembly elections. Jadeja will face direct challenge from AAPs Vasant Valjibhai Khetani and Congress candidate Mammadbhai jung Jat. Since 2007, the Abdasa has been a fortress of BJP, however, the question is whether they will be able to retain it this year too.

The Limbdi constituency is one of the 182 legislative assembly constituencies of Gujarat state which went to polls in the recently concluded elections. In 2020 assembly elections, the BJP leader Kiritsinh Jitubha Rana defeated Congress leader Khachar Chetanbhai Ramkubhai by a margin of 32 votes. This year, Kirtisinh Jitubha Rana will face AAPs Mayur Sakariya and Congress candidate Kalpana Karamsibhai Makwana. The Limbdi seat has always seen a stiff battle between BJP and Congress but with AAPs entry, things will get interesting. Will BJP retain power or will AAP make inroads, we will come to know on December 8.

(The above story first appeared on LatestLY on Nov 30, 2022 10:57 PM IST. For more news and updates on politics, world, sports, entertainment and lifestyle, log on to our website latestly.com).