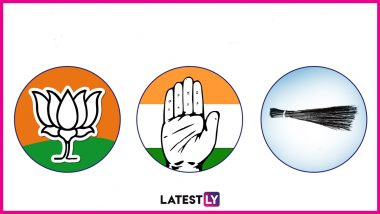 In the previous elections held in 2017, the BJP bagged  99 seats while the Congress ended up with 77 seats. AAP is a new entrant in the state riding high in the wake of the party putting up a stellar show in Punjab. The Congress and AAP will be banking on the 27 years of anti-incumbency against the BJP while the saffron party is banking on the "Narendra Modi" factor to counter any shortcomings. The BJP has also managed to assuage the Patidar sentiments by appointing Bhupendra Patel as the Chief Minister of the State. With the Gujarat Assembly Elections 2022 days away, who will win the important constituencies of Vadgam, Bhavnagar Rural, Majura, Viramgam and Ghatlodia?

Ghatlodia assembly seat under the Gandhinagar Lok Sabha constituency holds much significance as current chief minister Bhupendra Patel contests from this seat. He is the second leader to contest from this seat as a chief minister after Anandiben Patel. This seat has been a BJP bastion since being carved out from the Sarkhej Assembly constituency after the delimitation in 2008. Bhupendra Patel will be up against Amee Yajnik of Congress and Vijay Patel of the Aam Aadmi Party (AAP). The polling in Ghatlodia seat will be held on December 5, while the counting of votes will take place on December 8, 2022. Morbi, Jamnagar North, Amreli, Katargam, Varachha Road Elections 2022: Check Electoral History, Polling and Result Date of the Gujarat Assembly Seats

Bhavnagar Rural assembly constituency is a part of Bhavnagar Lok Sabha constituency. The ruling BJP has once again reposed faith in five-time MLA and prominent Koli community leader Parshottam Solanki despite his ill health. The Congress has given ticket to Revatsinh Gohil, while the new poll entrant Aam Aadmi Party (AAP) has fielded Khumansinh Gohil. Election in Bhavnagar Rural seat will be held in the first phase on December 1 while the counting of votes will take place on December 8. Thakkarbapa Nagar, Asarwa, Naroda, Bhuj, Surat East Elections 2022: Check Electoral History, Polling and Result Date of the Gujarat Assembly Seats

Vadgam Assembly constituency falls under the Patan Lok Sabha constituency and is reserved for candidates belonging to the Scheduled Castes. Jignesh Mevani, who won the last assembly election as an Independent candidate from Vadgam, is contesting from Congress this time. Manilal Vaghela of the Bharatiya Janata Party and Dalpat Bhatiya of the Aam Aadmi Party are contesting against Mevani. Vadgam will vote on the first phase of the Gujarat Assembly Elections on December 1 and the counting of votes will be held on December 8.

The Majura constituency in Surat is considered one of the safest seats for the BJP in Gujarat as the saffron party has been winning this seat since delimitation in 2012 and each subsequent election has only increased BJP’s vote percentage. BJP has fielded Harsh Sanghvi, the minister of state for home, from the seat. Congress has fielded Balvant Jain, an active member of the textile community, and AAP has fielded PVS Sharma who was previously BJP city vice president for Surat. The polling in the Majura seat will take place on December 1 while counting of votes will be held on December 8.

The Viramgam Assembly constituency, which falls under the Ahmedabad district, is set to go to polls on December 1,in the first phase of Gujarat Assembly Elections 2022. For the last ten years, the Congress has maintained its strong hold over the constituency. The BJP has fielded Congress turncoat and young Patidar leader Hardik Patel from this constituency. The saffron party leader faces Congress’s Lakhabhai Bharwad and Aam Aadmi Party's fielded Kuvarji Thakor on Viramgam seat. The counting of votes will take place on December 8.

(The above story first appeared on LatestLY on Nov 30, 2022 03:57 PM IST. For more news and updates on politics, world, sports, entertainment and lifestyle, log on to our website latestly.com).