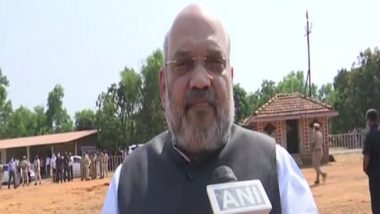 Namkhana, February 18: In a bid to woo women-voters in poll-bound West Bengal, Union Home Minister Amit Shah on Thursday announced 33 per cent reservation for women in government jobs if the party is voted to power.

Shah made the announcement while addressing a huge crowd of supporters in Namkhana village of the South 24 Parganas district and kicking off the fifth and final phase of "Poribortan Yatraa in Bengal. "If we come to power we will provide 33 per cent reservation for women in the government jobs," the Home Minister said.

This wasn't the only sop that Shah promised at the public meeting. He also said in case the BJP comes to power, it will works towards implementing the Seventh Pay Commission. Shah said the economy of the state is in such a precarious position that the Seventh Pay Commission is not given to employees of the state government. West Bengal Assembly Elections 2021: Amit Shah Had Lunch at Migrant Bangladeshi Family's Home in Narayanpur Village.

"If we are voted to power, I promise we will implement the Seventh Pay Commission benefits to all the employees," Shah said.

Shah also emphasised on the upliftment of the fishermen community in the state, "For welfare of fishermen, after coming to power, we will give Rs 6, 000 as 'fishermen Samaan Nidhi' like 'Kisan Samman Nidhi' to four lakh fishermen in the state," he said.

"To ensure the right price for their produce, the BJP government will create a ministry at the level of state minister. A seafood hub will be developed in the area of 24 Parganas," he said.

He further said that Gangasagar will be developed as a tourism and cultural hub. "The fair held at Gangasagar on the occasion of Uttarayan on January 14 will be given the status of international fair to bring tourists from across the globe," said the union home minister.

The BJP is giving a tough fight to the ruling Trinamool Congress in West Bengal. Assembly elections in the state are scheduled later this year.

(The above story first appeared on LatestLY on Feb 18, 2021 08:50 PM IST. For more news and updates on politics, world, sports, entertainment and lifestyle, log on to our website latestly.com).