After hearing detailed arguments by senior advocate Kapil Sibal, representing the West Bengal government, a bench of Justices Vineet Saran and Aniruddha Bose said: "You have made out the case for issuance of the notice. Let us see. We will give a short time for respondents to file counter." 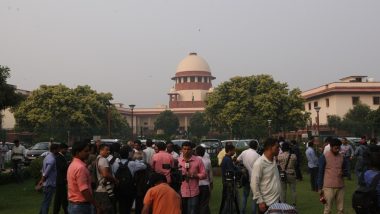 New Delhi, September 28: The Supreme Court on Tuesday sought a response from the Centre and others on a plea by the West Bengal government challenging the Calcutta High Court decision to order a CBI probe into cases of murder and crimes against women, which took place during post-poll violence in the state. However, the top court declined to pass any directions to the CBI to not lodge any more FIRs in the matter.

After hearing detailed arguments by senior advocate Kapil Sibal, representing the West Bengal government, a bench of Justices Vineet Saran and Aniruddha Bose said: "You have made out the case for issuance of the notice. Let us see. We will give a short time for respondents to file counter." As Sibal urged the bench to pass a direction to CBI to not register any more cases in the matter, the bench replied: "It is only a week, nothing will happen."

On his submission that the CBI is issuing notice to police officers in the cases, Justice Saran said: "You have argued about natural justice, we should not pass any order without hearing the other side." The top court has scheduled the matter for further hearing on October 7. Physical Hearing in Supreme Court May Start Post-Dussehra Break, Says CJI NV Ramana.

After the hearing concluded, Sibal sought an observation from the bench that the CBI probe into the matter will be subject to the outcome of the case in the top court.

The bench replied: "It is understood so even without passing a specific order... We don't need to say that." The Mamata Banerjee-led state government has challenged the high court order in the top court.

A five-judge bench of the Calcutta High Court had ordered a CBI investigation into all the alleged cases of heinous crimes in the state after the poll results after accepting the recommendations of an NHRC panel. For other criminal cases connected with post-poll violence, the high court had directed court-monitored investigation by a Special Investigation Team.

On September 20, the West Bengal government had told the Supreme Court that "shocking things" have happened in the state and cases, which included dacoity, were being transferred "en masse" to the CBI. "In one case, the man is alive. CBI is also investigating dacoity cases. All kinds of things are happening," Sibal submitted. Pegasus Row: Supreme Court Likely to Set Up Panel to Probe Snooping Allegations.

The state government's plea had argued that NHRC committee report was prepared in great haste, "with a pre-conceived and motivated objective and most crucially, in utter disregard of the principles of natural justice, the established principles of criminal jurisprudence". It further added that direction transferring cases to the CBI and the SIT was not in accordance with the principles laid down by the top court, as such transfers must be done in rare or exceptional cases only.

(The above story first appeared on LatestLY on Sep 28, 2021 04:38 PM IST. For more news and updates on politics, world, sports, entertainment and lifestyle, log on to our website latestly.com).