A day after posters of former Chief Minister Vasundhara Raje were removed from the state BJP headquarters, several posters of 'Searching for missing' have been seen in different parts of Jhalawad districts. 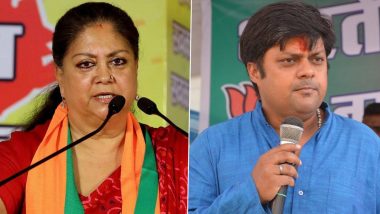 Jaipur, June 10: A day after posters of former Chief Minister Vasundhara Raje were removed from the state BJP headquarters, several posters of 'Searching for missing' have been seen in different parts of Jhalawad districts.

The message in these posters claim that the Raje, the BJP MLA from Jhalawad along with her son Dushyant Singh, MP from Jhalawar-Baran have been "missing" amid the coronavirus pandemic outbreak and those finding the two shall be rewarded.   NSUI's Nagesh Kariyappa Files Missing Complaint Against Prime Minister Narendra Modi, BJP Top Brass

The posters, as per the message, have been put on behalf of 'tormented people of Jhalawad'.

The posters depict pictures and designations of Raje and Dushyant and question where have the two gone?

Missing posters of @VasundharaBJP and her son @DushyantDholpur appears on walls of jhalawad district a day after Raje' posters were moved from party state headquarters in #Jaipur.@ians_india pic.twitter.com/0AaIZ3VkUe

"You should not be scared to come back, we the people shall forget everything in two to four days and you can then continue with your corrupt arrangements. No one shall say anything to you," read the message.

BJP sources said that Raje and Dushyant have been shuttling between Delhi and Dholpur and have been missing from the ground of Jhalawad which have left the people aggrieved amid the pandemic.

Although Raje has been running the Office of Vasundhara Twitter handle along with Vasundhara Jan Rasoi to mark her presence, her presence on the ground is missed by people amid the pandemic.

The local administration are likely get the posters removed.

"I have called a press conference at 2 p.m. to speak on the issue," he told IANS while he was attending a video conference with Raje to discuss matters.

(The above story first appeared on LatestLY on Jun 10, 2021 02:48 PM IST. For more news and updates on politics, world, sports, entertainment and lifestyle, log on to our website latestly.com).