The National Students Union of India (NSUI) has filed a ‘missing person' report with the Delhi Police against Prime Minister Narendra Modi and several of his Cabinet ministers, accusing them of running away amid the COVID-19 crisis. 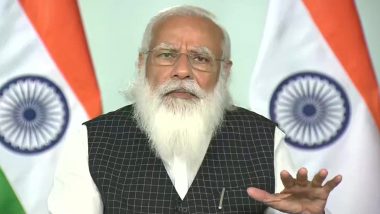 New Delhi, May 14: The National Students Union of India (NSUI) has filed a ‘missing person' report with the Delhi Police against Prime Minister Narendra Modi and several of his Cabinet ministers, accusing them of running away amid the COVID-19 crisis.

The move by the student wing of the Congress came just two days after a similar complaint was filed against Union minister Amit Shah over the ‘disappearance of the country's Home Minister at the time of the pandemic'.  NSUI's Nagesh Kariyappa Files Missing Complaint Against Home Minister Amit Shah With Delhi Police

In his complaint, Kariyappa alleged that all these BJP leaders were last seen during the Assembly elections in West Bengal.

Kariyappa said that at a time when the second wave of the pandemic is raging across the country, Modi and his Cabinet ministers have turned a blind eye to the sufferings of the people.

The NSUI leder said that as politicians, they have to be accountable to the whole country, but even in the the darkest time of the pandemic, the Prime Minister and his ministers are running away from the crisis situation.

Kariyappa also questioned the BJP about its achievement in the last seven years and said that it has been able to sustain only by crafting 'jumlas' and making fake promises.

Stating that lakhs of people are suffering across the country because of lack of medical resources, Kariyappa said, "People are even struggling to get a place to cremate the dead. Where are the so called leaders who had assured to make India a global leader, but have instead made people suffer like this?"

Meanwhile, NSUI chief Neeraj Kundan said that when the people are in dire need, the Prime Minister and his Cabinet colleagues are missing in action.

"They should have been on the forefront when a number of people have died due to Covid largely because of lack of medical equipment," Kundan said.

(The above story first appeared on LatestLY on May 14, 2021 04:58 PM IST. For more news and updates on politics, world, sports, entertainment and lifestyle, log on to our website latestly.com).