Black marketing of Remdesivir continues in Delhi and the National Capital Region (NCR) with one more person here being cheated off over Rs 49,000 while trying to procure the drug for her ailing mother. 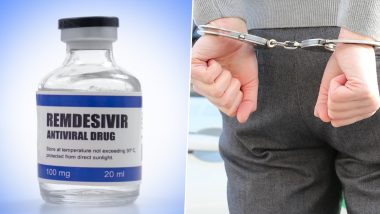 New Delhi, May 18:  Black marketing of Remdesivir continues in Delhi and the National Capital Region (NCR) with one more person here being cheated off over Rs 49,000 while trying to procure the drug for her ailing mother.

Amrita Mallick, resident of Greater Kailash-1, stated that her mother was admitted in a hospital in critical condition, and six doses of Remdesivir injection was prescribed by the doctor. Remdesivir Black-Marketing: Nurse And 2 Lab Technicians of Medical College in Madhya Pradesh's Shahdol Arrested

The Remdesivir vial was out of stock, so Mallick was searching for it everywhere that is when she was taken advantage of. She transferred the amount to a person who assured her on phone to provide six doses of the medicine prescribed by doctor -- but recieved nothing return.

Mallick had come across a mobile number on WhatsApp promising help.

She called on the number and transferred Rs 49,200 in the bank account of the person -- after that the phone was switched off.

The victim then lodged a First Information Report at Greater Kailash police station on May 6.

Analysing details, one suspicious person of west Delhi's Najafgarh was zeroed in on.

The team raided the Najafgarh address and found a clue regarding the culprit, said the police.

Raid was conducted at Chajupuram village in Haryana's Mahendergarh and one Sachin Yadav was arrested after interrogation.

Yadav, a resident of Chajupuram, had two mobile phones, which he used to swindle the woman among others. Rs 59,855 was recovered from him, said the police.

During interrogation, Yadav disclosed that he circulated messages in various social media platforms wherein availability of Remdesivir injection was displayed and his mobile numbers were also sent.

During Investigation it was revealed that he had duped nine people among which another case at C.R. Park police station was registered.

"Further investigation is being done to ascertain the details of other victims. The accused was sent to judicial custody on Tuesday."

(The above story first appeared on LatestLY on May 18, 2021 01:25 PM IST. For more news and updates on politics, world, sports, entertainment and lifestyle, log on to our website latestly.com).