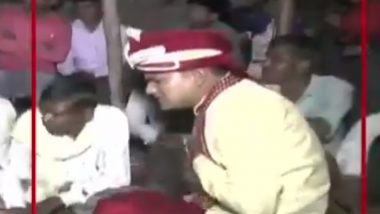 Uttar Pradesh, April 30:  Although the Uttar Pradesh government has banned celebratory gun firing in weddings long time ago, the incidents continues to remain unabated. In an incident of gunfire reported from a wedding in Lakhimpur on  Monday, a groom was shot dead.

According to the video footage, the groom's own friend is seen fiddling with a gun. He accidentally pulls the trigger, and the bullet hits the chest of the groom.

Other relatives sitting around the groom performing puja with him, for a while do not understand what has happened, but as the groom collapses, they realise that the bullet has hit him, the footage shows.

The D-day which is a substitute for 'wedding day', become a 'death day' for the deceased.

It is noteworthy that earlier too such incidents had been reported, therefore, the UP government time and again reiterated that celebratory gun firing during the wedding is not allowed. It also cautioned people of its dangerous consequences by registering cases under Indian Penal Code (IPC) act 302 (murder) and not under culpable homicide not amounting to murder. Despite stringent action had been taken by the UP government, people continue to indulge in celebratory gun firing.

The news report also mentioned that the accused is absconding and the police yet to catch hold of him.

(The above story first appeared on LatestLY on Apr 30, 2018 04:55 PM IST. For more news and updates on politics, world, sports, entertainment and lifestyle, log on to our website latestly.com).