Days after a man was devoured by a crocodile in the Dudhwa range, a similar incident has now been reported from Pilibhit district. 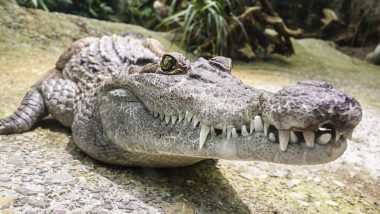 Pilibhit , July 4:  Days after a man was devoured by a crocodile in the Dudhwa range, a similar incident has now been reported from Pilibhit district.

The partially eaten body of a missing 15-year-old boy was found in the Khakhra river on Friday.  Crocodile Attacks Man in UP's Lakhimpur Kheri

The condition of the body indicated that the boy had been killed by a crocodile.

The victim was identified as Om Prakash of Semarkheda village under the jurisdiction of Kotwali police circle.

He was reportedly bathing his buffalo in the river when he was apparently dragged into deep waters by a crocodile.

Pilibhit SP, Kirit Kumar Rathod, said, "After discussing with the district magistrate, we have decided to identify the areas near human habitat where there is a presence of crocodiles and will put up signboards there to keep people away. Forest department will also launch an awareness campaign to prevent such incidents."

(The above story first appeared on LatestLY on Jul 04, 2021 11:26 AM IST. For more news and updates on politics, world, sports, entertainment and lifestyle, log on to our website latestly.com).