In a bizarre incident, a priest who went to a government procurement centre to sell wheat grown in land belonging to the temple, was asked to produce the Aadhaar card of the deity. 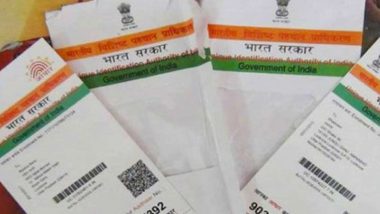 Banda, June 9: In a bizarre incident, a priest who went to a government procurement centre to sell wheat grown in land belonging to the temple, was asked to produce the Aadhaar card of the deity.

The incident took place two days ago in Kurhara village in Attara tehsil in Banda.

Mahant Ramkumar Das, the priest and chief caretaker of the Ram Janki temple, said he wanted to sell 100 quintals of wheat in a government mandi (market). He had done the online registration with the help of others.  Aadhaar Card for Newborn: Here’s How To Enroll For Your Child’s 12-Digit Unique Identification Number Using Just 2 Documents at uidai.gov.in

The caretaker priest of the temple arrived at the government mandi to sell the crops grown on the temple land. It was then that he was asked to produce the Aadhaar card of the deity in whose name the land was registered.

The seven-hectare land is registered in the name of the deity, in this case, Lord Ram and Janki.

"The registration was cancelled as I could not produce the Aadhaar card, where do I get Aadhaar of the Lord?" he asked.

The priest said that he spoke to the sub divisional magistrate (SDM) Saurabh Shukla.

"He told me the registration cannot be done without Aadhaar and that is why it has been cancelled by his office," he said.

The priest said that last year, he sold 150 quintals of produce at the government mandi. He said he has been selling the produce for the last several years, but never faced a situation like this.

Meanwhile, district supply officer, Govind Upadhyaya said the rules were clear that produce from mutts and temple could not be purchased.

The purchase policy did not have any such provision either, he said, adding earlier "khatauni" (land records) were admissible but now registration has become compulsory.

And for registration, one must have the Aadhaar card of the person on whose name the land was registered.

The SDM said that the priest was not asked to produce the Aadhaar card of the deity, but he was explained the process.

"The policy has been decided at the government level and purchase was being done on the basis of that policy," he said.

The priest is worried. He said, "How are we to meet the expenses and get our food if we cannot sell the crops in the mandi?"

He said that left with no option, he would now sell the produce to the commission agents at a throwaway price.

(The above story first appeared on LatestLY on Jun 09, 2021 02:07 PM IST. For more news and updates on politics, world, sports, entertainment and lifestyle, log on to our website latestly.com).