BJP president JP Nadda on Wednesday asserted that the party is all set to notch up a big win in the 2022 assembly election in Uttarakhand on the strength of development works done in the state by the party's double engine government. 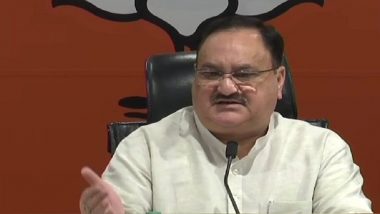 Dehradun, Sept 29: BJP president JP Nadda on Wednesday asserted that the party is all set to notch up a big win in the 2022 assembly election in Uttarakhand on the strength of development works done in the state by the party's double engine government.

Addressing the party's Shakti Kendra conveners and incharges across the state virtually, Nadda said booth level workers of the party play a crucial role in its electoral performances.

He asked them to strengthen the party at the grassroots and exhorted booth level workers to connect with the masses and publicise among them the big strides of development taken by the the state under the double engine government. Uttarakhand Assembly Elections 2022: Arvind Kejriwal Promises Unemployment Allowance, Job Quota for Local People if Voted to Power.

"I call upon you to join the mission of strengthening the party at the booth level in the birth centenary year of former party president Kushabhau Thakre. It will be a true tribute to the leader," he said.

Recalling how the people of Uttarakhand had asserted their faith in the leadership of Narendra Modi and ensured the BJP's victory from all the five Lok Sabha seats in the 2014 general elections, Nadda said they gave a massive mandate to the party in the 2017 state assembly polls in which it won 57 out of a total of 70 seats.

The BJP retained all the five Lok Sabha seats of Uttarakhand in the 2019 general elections, he said adding he was confident that the party will notch up a big victory once again in 2022 assembly polls.

"The momentum imparted to development works in the state under the leadership of Chief Minister Pushkar Singh Dhami under the guidance of the prime minister will ensure that the BJP forms the government again with a massive victory in the 2022 assembly polls," he said.

"A new narrative of development is being written in Uttarakhand under the double engine government," he said and especially mentioned the Rs 12000 crore Chardham all-weather road as an instance of it saying the project was likely to be completed next year.

He said under the leadership of the prime minister the country is fighting an effective battle against the Covid pandemic.

"Two world class anti-Covid vaccines were developed in India under the prime minister's leadership and the world's largest vaccination campaign is being carried out in the country. On the prime minister's birthday on September 17 more than 2.5 crore people were vaccinated on a single day," he said.

He also asked party workers to encourage people to get vaccinated so that the target of cent per cent vaccination is achieved by December this year.