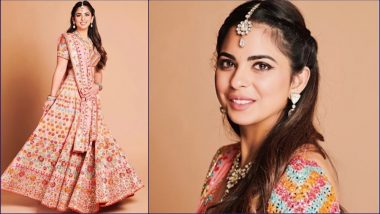 As the netizens are gripped with DeepVeer wedding fever, we have another beautiful bride-to-be all set, to begin with her pre-wedding functions. She is none other than Isha Ambani, daughter of India’s richest man, Mukesh Ambani. The 27-year-old who is all set to tie the knot with Piramal scion, Anand Piramal on December 12, kicks off with the pre-wedding celebrations. Pictures of Isha Ambani in Abu Jani Sandeep Khosla lehenga is shared by the designer and celebrity stylist Ami Patel, and they have instantly gone viral. Isha Ambani and Anand Piramal’s Wedding Invitation is Out! Mukesh Ambani's Daughter's Marriage Invite is Grand in Every Way! See Video.

The celebrated designer duo posted a pic of Isha on their official Instagram handle writing, “FOLKSY & FABULOUS! Isha Ambani wears Tharad by Abu Jani Sandeep Khosla Couture.” Earlier this year, they had designed a lehenga for Bollywood actress Sonam Kapoor’s mehndi function. And this time, it is the young heiress who looks like a million bucks wearing designer’s beautiful multihued mirror work design. Abu Jani and Sandeep Khosla for whom elegance remains the cornerstone of their design have presented Isha in hand-embroidered custom couture. Isha Ambani & Anand Piramal Marital Pad at Worli Sea Face: Know All Details About Gulita Bungalow.

As for the overall styling for the event, noted stylist Ami had done impressive work. Not going overboard with jewellery or accessories, she has kept the look minimalistic yet elegant and classy. The touch of flair and flamboyance is what we love about this look of Isha Ambani. Priyanka Chopra Bachelorette Pics: Isha Ambani & Parineeti Chopra Join Nick Jonas' Fiance at Amsterdam.

Isha and Anand will be marrying in a lavish wedding in Mumbai. While their nuptials will take place on December 12, they will be flying to Udaipur for pre-wedding festivities taking place on December 8 and 9. The couple has already zeroed upon their marital abode, which is a grandeur 450 crore luxurious sea-facing bungalow gifted by Isha’s in-laws Ajay and Swati Piramal.

(The above story first appeared on LatestLY on Nov 16, 2018 11:17 PM IST. For more news and updates on politics, world, sports, entertainment and lifestyle, log on to our website latestly.com).