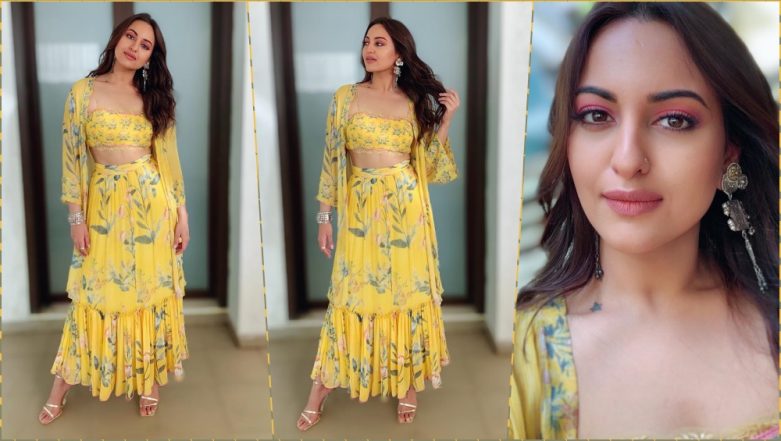 Bollywood actress Sonakshi Sinha has begun the promotions of her next film, Kalank, a Karan Johar-produced period saga. And what better day than the opening match of country’s favourite Twenty20 cricket tournament, Indian Premier League (IPL) on March 23. The 31-year-old along with her co-star, Varun Dhawan are attending VIVO IPL 2019’s first game between MS Dhoni-led Chennai Super Kings (CSK) and Virat Kohli’s Royal Challengers Bangalore (RCB). The ‘Yellow vs Red’ war got Sona and Varun pretty involved as they dressed according to sides they are going to rooting for. CSK vs RCB, Live Cricket Score Updates of IPL 2019 Match.

Sonakshi went for yellow ensemble by country’s famous designer, Anita Dongre. The Ittefaq actress will give you a major CSK fan vibe with her bright and cheery OOTD. This dress, which has a crop top and a mid-length skirt and a shrug, all in muted yellow with printed floral and vines designs. Sonakshi wore silver strap sandals from Truffle Collection India. She paired oxidised earrings from Lara Morakhia and statement bracelet on her right hand from Amrapali Jewels. She let her long tresses open and went for light makeup, which despite having a pink eyeshadow did not take away from her fresh look. Chennai Super Kings vs Royal Challengers Bangalore Live Cricket Score 1st T20 Match.

Today for #Kalank on IPL! Styled by @mohitrai (tap for deets) hair by @themadhurinakhale and makeup @mehakoberoi 💛

#ipl It’s red vs yellow. Rcb VA Chennai. #virat vs #dhoni. Team #kalank is going to be there @aslisona @aliaabhatt. @adityaroykapur hope u behaving yourself in ur camp in goa after a major weight cut

Abhishek Verman-directed Kalank boasts of a stellar cast including Alia Bhatt, Madhuri Dixit Nene, Sanjay Dutt and Aditya Roy Kapur. Apart from Kalank, which will release on April 19, Sonakshi will also be seen in Bhuj: The Pride Of India. The movie is directed and written by Abhishek Dudhaiya, is based on real-life events during the Indo-Pak war of 1971. The film also stars Ajay Devgn, Sanjay Dutt, Parineeti Chopra and Ammy Virk.