Kartik Aaryan recently headlined the news when he unfollowed his rumoured beau Janhvi Kapoor on Instagram. Fans speculated that something was not right and the two have called it quits. 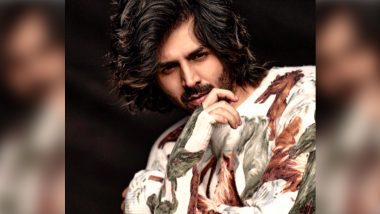 Kartik Aaryan has a quirky fashion sense and his love the fact that he likes to experiment with his style. The actor, when not busy with work, is often seen sharing pictures of himself in different outfits and looks. During the lockdown, his beard had become a huge topic of discussion when the actor decided not to groom it. People were digging his new avatar but Kartik soon had to say goodbye to that look. While the beard was gone, Kartik did grow his hair long and has been rocking that look ever since. Kartik Aaryan Moves On To Dostana 2 But Not Without His Woh Ananya Panday.

He is often seen sharing picture where he is flaunting his wavy locks. Recently, the actor posted a yummy picture of his in a white sweater and the fans haven't stopped gushing about how handsome he looks. The sweater had horses printer on it and looks quite subtle on Aaryan. He paired the sweater with a pair of denim jeans. He left his hair do their magic and cover his face effortlessly. The actor captioned the image asking a very important to his fans. He enquired of they will watch a film on an OTT platform to in theatres and fans flooded his comments section with answers.

Kartik Aaryan recently headlined the news when he unfollowed his rumoured beau Janhvi Kapoor on Instagram. Fans speculated that something was not right and the two have called it quits. While fans were trying to contemplate what had happened between the two, we found out that the two had started following each other on social media hours after unfriending each other on the photo-sharing app. The two even took a trip to Goa together on New Years. Sara Ali Khan and Kartik Aaryan Share Their Pics From Golden Temple On The Occasion of Gurpurab 2019.

Workwise, Kartik has many films in his kitty. He will be seen with Janhvi and television star Lakshya Lalwani in Karan Johar's Dostana 2. The crew started shooting for the film back in 2020 in Amritsar but the shoot came to a halt when the pandemic hit the world. The team was supposed to shoot in the UK for the next schedule but with the current pandemic situations, the shoot has been shifted indefinitely. Apart from this, Kartik has Bhool Bhulaiyya 2, Dhamaka in his kitty. He is also speculated to be a part of a film with Shah Rukh Khan.

(The above story first appeared on LatestLY on Jan 31, 2021 04:10 PM IST. For more news and updates on politics, world, sports, entertainment and lifestyle, log on to our website latestly.com).