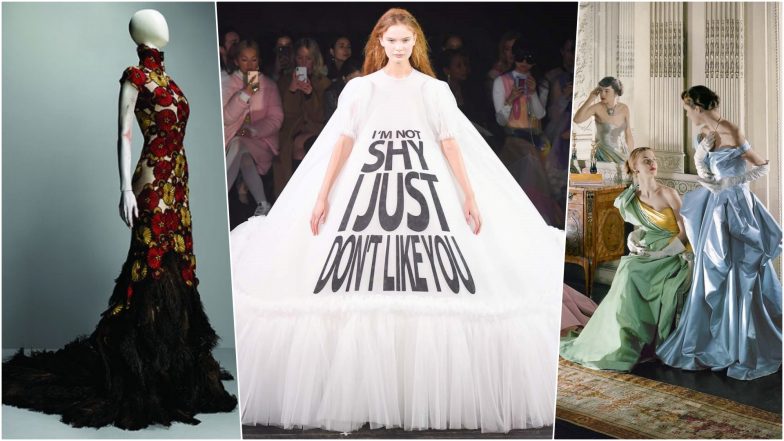 The Met Gala is one of the biggest fashion events that take place every year in New York, USA. It is held on the first Monday of May every year. Met Gala 2019 will be held on May 6 this year. And the theme for Met Gala 2019 is Camp: Notes on Fashion. Formerly called as the Costume Institute Gala, Meta Gala is also known as the Met Ball. It is an annual fundraising function for the benefit of the Metropolitan Museum of Art's Costume Institute in New York City. Each year, guests are expected to dress according to a specific theme, which sets the tone for the night. It is announced much ahead of the event so the guests can design their costumes in advance for the big night. Met Gala 2019 Date & Theme: Camp: Notes on Fashion; Everything You Want to Know About the Met Ball Theme This Year.

The Met Gala is thus a fashionable night with guests interpreting the theme in their own way to style themselves. Famous faces, celebrities and fashion experts make their presence felt on the red carpet and all eyes are on their costumes. This year's theme is inspired by Susan Sontag’s 1964 essay ‘Notes on ‘Camp’. It will be interesting to see how people interpret camp fashion on the red carpet this year. Let us look at the past years' themes of the Met Gala. Nick Jonas' Thoughts On Attending MET Gala 2019 With Wife Priyanka Chopra Makes Him The Sweetest Husband!

2003: "Goddess: The Classical Mode" was Met Gala 2003 theme. It aimed to explore classical fashion. The truly timeless style of classical dressing forms along with decorative items from the 18th century was a part of this year's exhibition.

2005: "The House of Chanel" was the theme which recreated the iconic fashions of the Chanel fashion brand. From Coco Chanel to Karl Lagerfeld, the exhibition peaked into Chanel's iconic designs and their iconographical details.

2006: "AngloMania: Tradition and Transgression in British Fashion", this theme celebrated British fashion and its designers. The Anglomania theme highlighted the ideals, stereotypes, and representations of Englishness by juxtaposing historical costume with late 20th and early 21st-century fashions.

2007: "Poiret: King of Fashion" was a theme that honoured designer of the 20th century Paul Poiret. His collections freed the women from corsets with his creations of skirts, tunics and harems. Multiple facets of his originality were presented here.

2008: "Superheroes: Fashion and Fantasy" was a theme that intertwined fashion with fictional superhero characters. Movie costumes, avant-garde haute couture was on display. And it aimed to show how superheroes serve as the ultimate metaphor for fashion and its ability to empower and transform the human body.

2009: "The Model As Muse: Embodying Fashion" was the theme for 2009. It focused on iconic models in the 29th century and how they played a role in the evolution of the fashion industry.

2010: "American Woman: Fashioning a National Identity", the Met Gala theme for 2010 explored into the American woman from 1890 to 1940. It looked into the perceptions and how it affected the women. The change in fashion among these women was taken into consideration.

2011: "Alexander McQueen: Savage Beauty" was the theme for the exhibition of 2011. It featured the clothing created by fashion designer Alexander McQueen along with his accessories. It was an extremely popular theme which created a record attendance. The exhibit featured McQueen's pieces from the archives of his own London fashion house, Alexander McQueen, and of the Parisian couture house Givenchy.

2012: "Schiaparelli and Prada: Impossible Conversations" was the Met Gala 2012 theme. It aimed to explore the striking affinities between Elsa Schiaparelli and Miuccia Prada two creative women from different eras. It suggested new interpretations of the designers cutting edge-work, the concept of fashion, taste and feminity.

2013: "Punk: Chaos to Couture," this theme aimed to stress the impact of punk in the fashion sphere. It depicted the influence of the genre from the early 1970s to the 2000s and beyond. The exhibition included some original punk garments and recent, directional fashion to illustrate how haute couture and ready-to-wear borrow punk's visual symbols.

2014: "Charles James: Beyond Fashion" was the theme of the year. It celebrated Charles James a major figure in the fashion world. It was a lively theme that displayed 100 of his most spectacular designs. Ball gowns and larger than life costumes were seen on the red carpet.

2015: "China: Through the Looking Glass" was the Met Gala 2015 theme. The exhibition celebrated China's influence on the western world in the arena of fashion. This exhibition gathered a record amount of visitors knocking off the 2011's numbers.

2016: "Manus x Machina: Fashion in an Age of Technology" was a theme that went ahead in technology. From handmade and machine-made fashion, the exhibition had over 100 pieces of ready-to-wear pieces and haute couture. Using available material or creating something new with machines and tech influence was the essence of this theme.

2018: "Heavenly Bodies: Fashion and the Catholic Imagination" was last year's theme of the Met Gala.  It was designed to create a dialogue between fashion and religious arts in the museum. They wanted to show how material Christianity helped 'Catholic imagination.'

So each year is a carefully crafted theme that highlights some best collections of some renowned designers to evolving fashion over the centuries. This year's Met Gala will see how people interpret Camp Fashion.