Michele Morrone has taken to his Instagram handle to share a few hot pictures of him. In the pictures, the 365 Days actor can be seen donning a sexy sleeveless striped outfit. 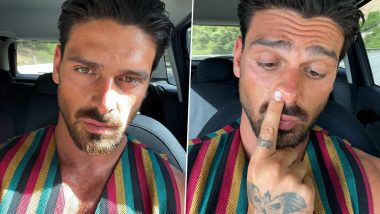 Michele Morrone is one of the sexiest actors in the world. The actor knows how to catch attention with his stunning pictures. He is not only known for his impeccable acting skills in Netflix's erotica film 365 Days but also for his good looks and beefed-up physique. Morrone loves to keep his fans hooked by sharing several hot pictures of him on social media. He enjoys a massive fan following on Instagram. Michele is a heartthrob for millions of females across the world. They literally drool over his good looks.

Recently, Michele's nude pictures from the sets of 365 Days sequel got leaked online. Later, the star took to his Instagram story to issue a strong statement while expressing his disappointment. Now, amid the report of his full-frontal naked pictures leak, the 365 Days star has taken to his Instagram handle to share a few alluring pictures of him. In the pictures, the actor can be seen flaunting his various expressions while he can be seen donning a sexy sleeveless striped outfit. While sharing the pictures, Michele wrote, "Pressure is precious." Soon after he posted the pictures, several fans started pouring in comments on the same. One of his fans wrote, "You are my favourite," while another one simply wrote, "Wow."

Earlier, when his nude pictures got leaked, he took to his Instagram story and wrote, “As an actor your life becomes public. But, as a human being, I would still like my privacy to myself, and I'm a huge fan of privacy. It is never ok to invade someone's privacy and it's very disrespectful. What happened is a big offence to me.”

He also added, "I really wanna thank all of my online family for taking action against all the private images of me that leaked while I was working on set professionally. I really appreciate what you've all done guys... as always, Thank you... I love you!!"

Currently, Michele Morrone is busy shooting for the sequel of Netflix’s 365 Days. It will see him playing the role of gangster Massimo Torricelli and he will also be reuniting with his co-star Anna-Maria as Laura Biel.

(The above story first appeared on LatestLY on Jun 27, 2021 04:11 PM IST. For more news and updates on politics, world, sports, entertainment and lifestyle, log on to our website latestly.com).