Sonam Kapoor’s Looks for Koffee With Karan Over the Years: A Look Her Outfits for All Seasons Ahead of KWK Season 7 Episode 6

While Kareena Kapoor’s pregnancy look in KWK Season 5 remained unparalleled, Sonam’s maternity style has aroused the question of who wore the pregnancy outfit in a better fashion? So, without any further ado, pick the favourite mother-to-be style at Karan’s prominent show as Sonam’s glamorous attire at all seasons of Koffee With Karan awaits to be checked below.

Sonam Kapoor’s Looks for Koffee With Karan Over the Years (Photo Credits: Instagram)

Sonam Kapoor has an undisputed class when it comes to talking about her fashionable looks that are highly lavish and elegant. She is known to be the B-town fashionista whose style quotient is admired by all. With Koffee With Karan Season 7 currently creating a buzz for unveiling all the Bollywood secrets, how can fans not miss Sonam Kapoor Ahuja and her savvy attitude on Karan Johar’s famous talk show? The Raanjhanaa fame is all set to feature in Episode 6 of KWK with her cousin Arjun Kapoor. Ahead of the premiere of the upcoming episode, take a glance at Sonam Kapoor Ahuja’s iconic looks at Koffee With Karan over the years. Her chic style and the radiant vogue will make her fans head over heels!

Sonam Kapoor, daughter of Anil Kapoor and Sunita Kapoor, made her debut with Sanjay Leela Bhansali’s Saawariya, released in 2007. Since then, she has been creating magic with her ultimate charm and classy persona among the fashion police, who adore her for over-the-top picks and exuberant style statements. The actress married businessman Anand Ahuja in 2018 and is currently pregnant with their first child. While Kareena Kapoor’s pregnancy look in KWK Season 5 remained unparalleled, Sonam’s maternity style has aroused the question of who wore the pregnancy outfit in a better fashion? So, without any further ado, pick the favourite mother-to-be style at Karan’s prominent show as Sonam’s glamorous attire at all seasons of Koffee With Karan awaits to be checked below. Koffee With Karan Season 7 Episode 6: Arjun Kapoor Calls Sonam Kapoor A Mess – Here’s Why (Watch Promo Video)

Sonam exudes gorgeousness in her mommy-to-be black outfit that looks incredible! The exaggerated puffed sleeves and the sweetheart neckline give her the perfect style that she is best known for! Her pregnancy glow takes the lovely ensemble to the next level!

Koffee With Karan Season 6 with Rhea and Harshvardhan Kapoor

Appearing with her siblings at KWK, Sonam gave major princess goals through her lilac Rami Kadi tulle dress with beautiful off-shoulder detailings. Her minimal make-up just gave her a bit of edge!

Sonam chose a dramatic not-so-ruffled outfit for the day as she shared the couch with then-pregnant Kareena. Sonam Dice Kayek’s couture featured a checkered blazer and pants with an extended skirt-like frill to give her the chic vibes of the season. 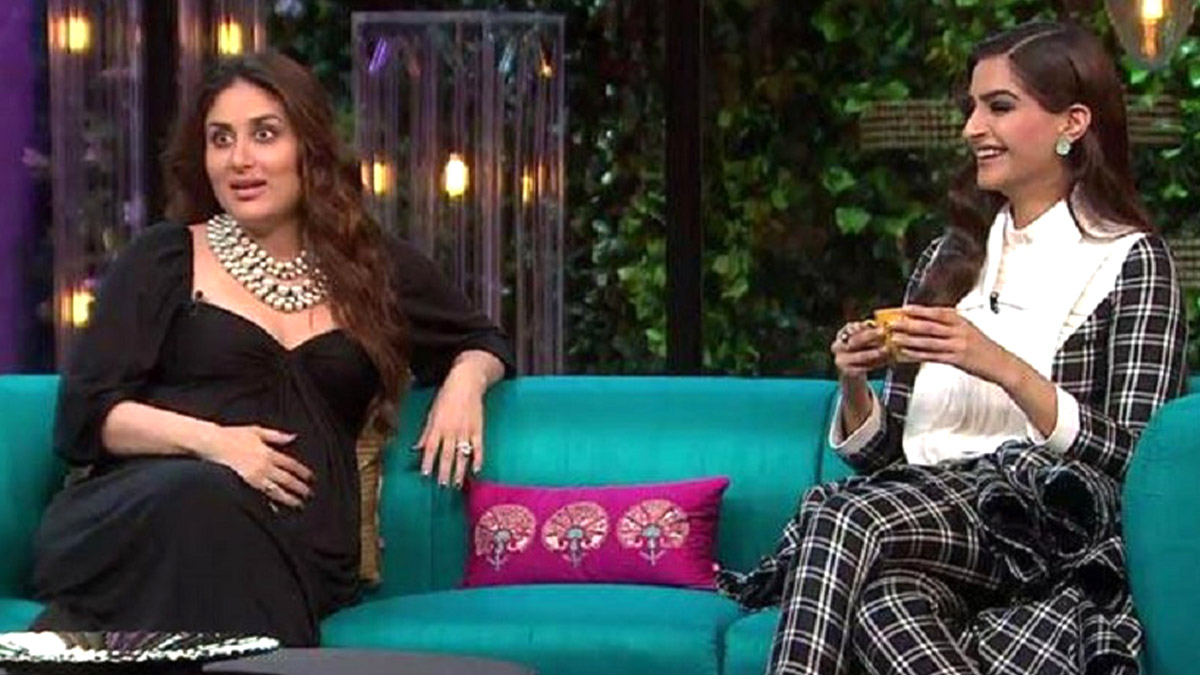 The father-daughter duo made a memorable appearance at KWK as both of them looked snazzy in their modish outfits. For Sonam, her Marc Jacob gown gave her a polished look as she paired her printed ensemble with ruby red long earrings! 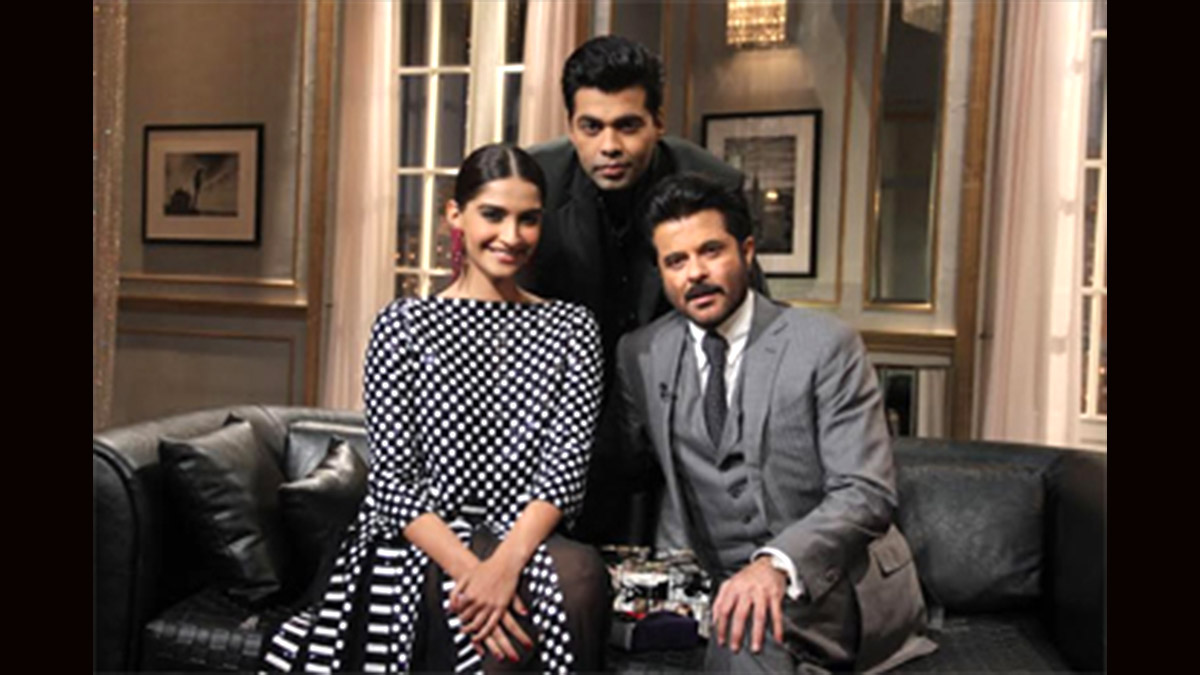 It all began at her Koffee debut in Halston Heritage’s golden gown that channelled her endearing personality absolutely well. Her fabulous style and lively spirit stole the show, giving her the exclusive label of ‘Style Icon of the Nation’. 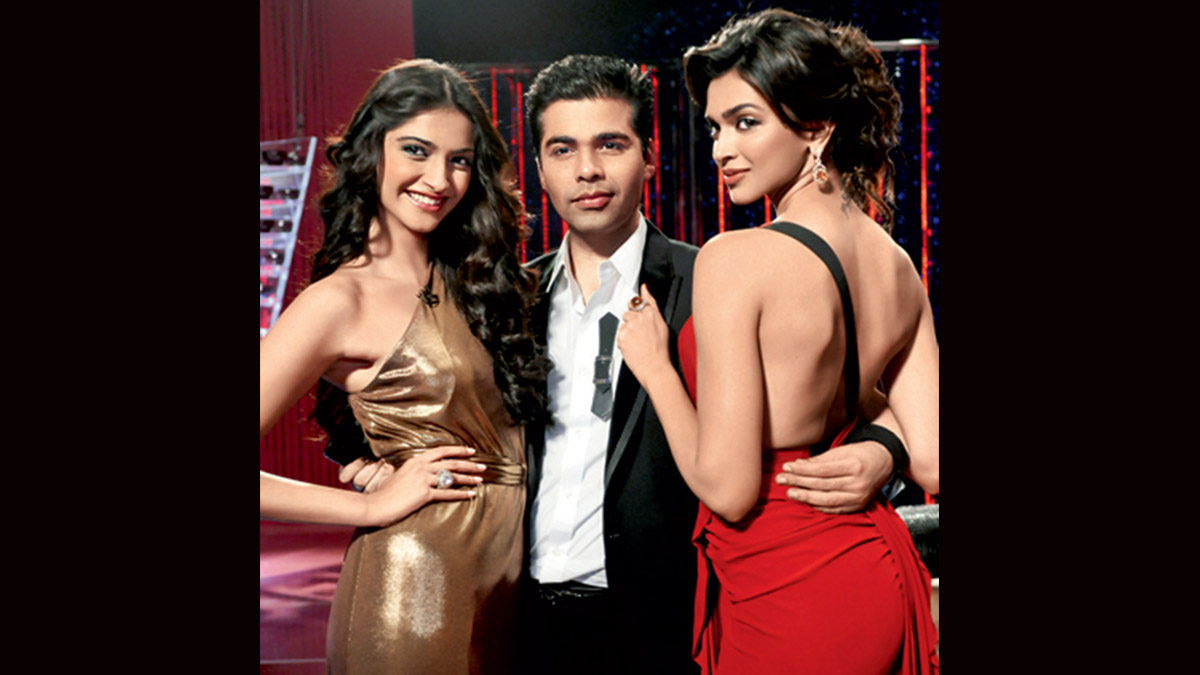 All her looks sat perfectly on her tall frame as she owned it all with her sheer radiance! No doubt, as viewers await her breezy presence at Koffee With Karan Season 7, they are sure to take the inspiration from her high-toned outfits and groovy looks!

(The above story first appeared on LatestLY on Aug 10, 2022 10:59 PM IST. For more news and updates on politics, world, sports, entertainment and lifestyle, log on to our website latestly.com).