Mahaparinirvan Diwas 2021: From History to Significance to Facts, Know Everything About Dr Babasaheb Ambedkar Death Anniversary 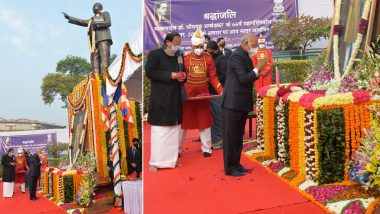 December 6, 2021, marks the 66th death anniversary of Bhimrao Ranji Ambedkar, popularly known as Dr. B.R. Ambedkar, the chief architect of the Indian Constitution. The social reformer, economist, thinker, politician, and the first Law Minister of Independent India, Bhimrao Ramji Ambedkar breathed his last while in his sleep and is paid tribute to on this day, regarded as the Mahaparinirvan Diwas. He was considered as ‘The Father of the Indian Constitution.' BR Ambedkar Death Anniversary: President Ram Nath Kovind, Vice President M Venkaiah Naidu, PM Modi & Other Political Leaders Pay Tribute to Babasaheb Ambedkar.

BR Ambedkar was the Chairman of the Constitution Drafting Committee for the constitution of independent India on August 29, 1947. He was also the law minister of India after independence. He had also started fortnightly and weekly papers named ‘Excluded India’, ‘Mook Nayak’, ‘Janta’ to raise voice against the atrocities on Dalits. His first wife was only 9 years old at the time of their marriage.

Babasaheb was regarded as a Buddhist guru because of his great influence in India to eradicate the social scourge of untouchability. Ambedkar's admirers and followers believe he was as influential as Lord Buddha, which is why his death anniversary is celebrated as Mahaparinirvana Divas.

Parinirvana, regarded as one of the major principles as well as goals of Buddhism, is a Sanskrit term that means release or freedom after death. As per the Buddhist text Mahaparinibbana Sutta, the death of Lord Buddha at the age of 80 is considered the original Mahaparinirvana. Owing to Ambedkar’s status as a Buddhist leader, his death anniversary is referred to as Mahaparinirvana Diwas.

On His 66th Death Anniversary Here Are 10 Interesting Facts About Dr. BR Ambedkar You Probably Did Not Know:

(The above story first appeared on LatestLY on Dec 06, 2021 12:33 PM IST. For more news and updates on politics, world, sports, entertainment and lifestyle, log on to our website latestly.com).