On World Oceans Day 2020, Learn Some Interesting Facts About The Largest Water Bodies on Earth

World Ocean’s Day celebrated worldwide on the 8th of June is an important occasion for the human population to recognise the important role oceans play in our existence. On Ocean’s Day, we take a look at some interesting facts about oceans. 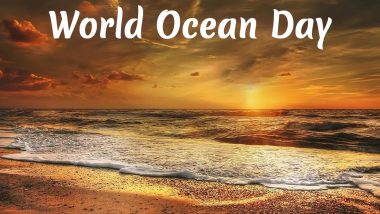 World Ocean’s Day celebrated worldwide on the 8th of June is an important occasion for the human population to recognise the important role oceans play in our existence. The United Nations officially accepted a proposal of a concept floated by Canada’s International Centre of Ocean Development (ICOD) and Ocean Institute of Canada(OIC) back in 1992 demanding a dedicated day for international discussion on the management of oceans. Several events are conducted all around the world particularly on beaches and in aquariums and zoos highlighting the significance of the role of oceans. The participation of the youth is considered of paramount importance in the Ocean’s Day celebrations and a host of art contests and film festivals are held to get them on board. World Oceans Day 2020: From Avoiding Plastic to Joining a Beach Cleanup; 7 Things You Can Do to be a Contributor in Saving Our Oceans.

On Ocean’s Day, we take a look at some interesting facts about oceans.

• A mountain with the length 40,390 miles is found in the oceans and is the longest mountain range present on the planet.

• Oceans have 95 % of the living beings on earth which highlights the organisms on land make up for a very small number.

• It is believed the oceans have a deposit of 20 million tonnes of gold with a concentration of a few parts per trillion and is highly diluted.

• The blue colour of the ocean is due to the fact that the blue wavelength of the sun’s rays penetrates deep into it and gives it a bluish tint.

• Communication cables are spread along the flat surface of the ocean and this is how the world is connected to the internet.

• The Pacific ocean has an expanse of 12,300 miles between Indonesia and Colombia which is five times more than the diameter of the moon.

• The pressure at the deepest points of the oceans is about 8 tons per square inch which often takes the water temperature to a staggering 750 degree Celsius.

• The deepest point on earth is the Mariana Trench of the pacific ocean which has a depth of 36,037 feet. Only 3 people have ever been to this spot with one of them being Hollywood director James Cameron.

• Ocean has a world of its own with mountains, ridges, rivers, seas and volcanoes. 90 per cent of all volcanic activity happens inside the oceans.

• It is estimated that about 3 million shipwrecks are present in the oceans including that of the famous ship – Titanic.

• The Great Barrier Reef spreads out over an area of 133,000 square miles off the coast of Australia and is the largest living structure on the planet.

Oceans are infinite and there is a need to continuously upgrade our knowledge about these enormous water bodies for a peaceful existence on earth. Their vast resources can be tapped without disturbing their delicate eco-system.

(The above story first appeared on LatestLY on Jun 08, 2020 09:54 AM IST. For more news and updates on politics, world, sports, entertainment and lifestyle, log on to our website latestly.com).