The rich heritage and cultural diversity that the state upholds are also discussed and cherished, especially on this day. Here’s wishing everyone a Happy Sikkim Foundation Day 2022! 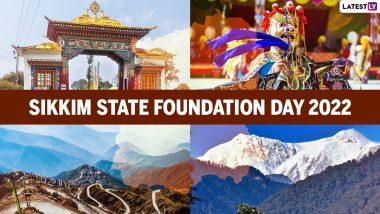 When is Sikkim Foundation Day 2022?

Sikkim Foundation Day 2022 will be celebrated on May 16. This annual celebration marks the anniversary of the day that Sikkim was integrated as an Indian state. On May 16, 1975, Sikkim became the 22nd state in the Indian Union Territory.

Sikkim is considered to be a state filled with rich cultural history, which is extremely significant. The Lepchas are said to be the earliest inhabitants of Sikkim. The state has since had several ethnic groups residing. In 1642, Sikkim was ruled by the Chogyal dynasty before becoming a protectorate state in the British Raj in 1890. When India received its independence in 1947, Sikkim unofficially became a part of India under India’s realm for its foreign policy, security and communication. Then, in 1975, the people of Sikkim demonstrated a rebellion to put an end to the monarchy in the state. On May 16, 1975, Sikkim was finally recognised as the 22nd Indian Union State.

The celebration of Sikkim Foundation Day is a grand affair in the state. Government offices and organisations often run awareness campaigns to spread the story of Sikkim’s independence and its inclusion in India through and through. The rich heritage and cultural diversity that the state upholds are also discussed and cherished, especially on this day. Here’s wishing everyone a Happy Sikkim Foundation Day 2022!

(The above story first appeared on LatestLY on May 15, 2022 08:11 AM IST. For more news and updates on politics, world, sports, entertainment and lifestyle, log on to our website latestly.com).