When is Ganesh Chaturthi in 2020? Know The Beginning Date of The 10-Day Festival of Ganeshotsav In Maharashtra This Year 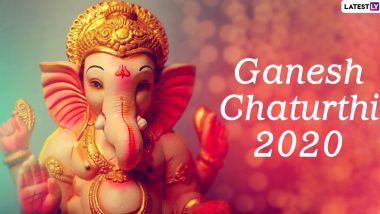 Ganesh Chaturthi, one of the widely celebrated festivals in the country is still more than a month away. But for those who celebrate it dearly by welcoming the Lord Ganesha home, the preparations begin well in advance. This year the 10-day Hindu festival of Ganeshotsav will be observed from August 22 to September 1, the day of Anant Chaturdashi. The festival also known as Vinayaka Chaturthi is celebrated in the Hindu calendar month of Bhadrapad, which falls between the gregorian months of August- September. Ahead of this festival, let us know in detail about the significance of this festival. Lalbaughcha Raja Cancels Ganeshotsav 2020 Celebrations: Here's How Chinchpokalicha Chintamani, Ganesh Gallicha Raja and Others Plan to Ring in Ganesh Chaturthi Festival in Mumbai Amid Coronavirus Pandemic in India.

Ganesh Chaturthi is said to be the birthday of Lord Ganesha, the elephant-headed God. Ganesha is the lord of wisdom, the beginner of good things and also one who keeps away the evil eye. So before any auspicious task, people bow to Lord Ganesha and seek his blessings. During the festival of Ganeshotsav, people bring an idol of Lord Ganpati and worship it at home for a specific number of days. Special decoration is made to sit the idol, along with traditional delicacies like sweets and modaks to please the Lord.

There are various stories about the birth of Lord Ganesha and celebrations of Ganesh Chaturthi. One of the earliest stories about the celebrations goes back to the rule of Shivaji Maharaj, when the festival was organised to bring in a sense of unity among the Hindu community. The festival once again revived the nationalist sentiment during the British rule when it was started by Lokmanya Tilak.

There are different tales about the birth of Lord Ganesha. One of them states that Ganpati was made by Lord Shiva and Goddess Parvati on the insistence of other gods to have a Vighnaharta (remover of obstacles) in their path of fighting the demons. So even today, before starting on any good thing, people pray to Lord Ganesha. The festival is celebrated primarily in the central and western states of Madhya Pradesh, Gujarat, Goa, Karnataka, Andhra Pradesh, Telangana, Maharashtra, Kerala, Tamil Nadu, West Bengal and Odisha. This time, there won't be as enthusiastic celebrations because of the pandemic. Many big pandals including Lalbaughcha Raja have already cancelled their celebrations to prevent the spread of COVID-19.

(The above story first appeared on LatestLY on Jul 08, 2020 03:58 PM IST. For more news and updates on politics, world, sports, entertainment and lifestyle, log on to our website latestly.com).