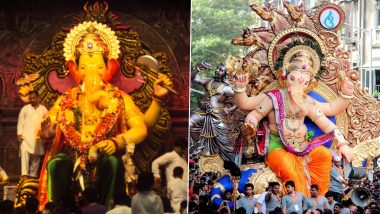 The dangerous effects of Coronavirus pandemic have cast its shadow on the yet another significant festival in India, Ganeshotsav. With no definite cure in sight and the stringent need for social distancing, it is highly difficult to have Ganpati festival this year. Ganesh Chaturthi celebrations begin on August 22 this year, but it will be an extremely low-key affair this time. Mumbai's most popular Ganeshotsav Mandal, Lalbaugcha Raja has decided to not hold the festival this time. There will be no Ganesh idol but instead, the Mandal will conduct blood donations and plasma therapy drives for all 11 days. This Ganesh mandal is one of the most-visited Ganpati idols in the city with long queues for all days. The decision comes in to avoid crowding while will worsen the coronavirus situation. But it is not just Lalbaugcha Raja, other famous mandals in Mumbai have also cancelled or taken steps that will prevent people from visiting. Let us look at how Ganesh Galli, Chinchpokali cha Chintamani, GSB Mandal are taking steps about celebrating Ganeshotsav 2020.

As we mentioned above, there will no idol of Ganpati coming in this year. The Mandal will instead donate the amount to CM's Relief Fund and felicitate families of martyrs who have lost their lives at LOC & LAC. They will also set up a blood and plasma donation camp instead to help the recoveries of COVID-19 cases. Lalbaugcha Raja Will Not Hold 2020 Gashesh Utsav Due to COVID-19 Pandemic! Twitterverse Welcomes Ganeshotsav Mandal's Move to Set Up Blood Donation & Plasma Therapy Camp For Ten Days Instead.

Last month, another famous mandal in Lalbaugh's Ganesh Gully also announced they would hold simple celebrations. Mumbaicha Raja Mandal informed that the idol will be just 4 feet tall, which will be immersed in an artificial pond. So there won't be the big 'utsav murti' which is brought in every year with much pomp and fervour. There will be an online darshan for all the devotees so they would not visit the mandal. Ganesh Galli cha Raja is also one of the oldest Ganpati pandals in the city.

Chinchpokali cha Chintamani is famous for not only for its celebration but also its Aagman Sohala (welcoming ceremony) which is an enthusiastic procession. This year, that ceremony is cancelled, instead the Mandal will make their Ganpati idol within the mandap. They have taken this decision to not burden the BMC and Mumbai police, considering the situation of the pandemic in the city. They too will use the money they receive as offerings to help the government hospitals with medical equipment and assistance. There will be no lavish decorations, unlike previous years, as one of their spokespersons was quoted in FPJ report.

The final decisions from other mandals are yet to be announced but one thing is clear, the festival will be an extremely low-key affair. There will either be no celebrations or those who are holding it will be relying on online darshan so that there won't be more crowds visiting.

(The above story first appeared on LatestLY on Jul 01, 2020 01:20 PM IST. For more news and updates on politics, world, sports, entertainment and lifestyle, log on to our website latestly.com).