World Malaria Day 2022 Date, Theme, History & Significance: From Malaria Symptoms to Prevention Tips, All You Need To Know About the Mosquito-Borne Disease

Every year April 25 is celebrated as World Malaria Day all over the world. Many countries in the world are fighting malaria, a deadly disease caused by mosquito bites. 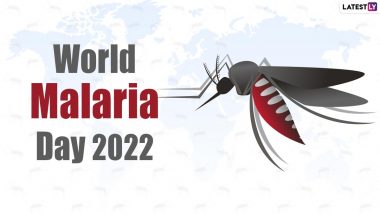 Every year April 25 is celebrated as World Malaria Day all over the world. Many countries in the world are fighting malaria, a deadly disease caused by mosquito bites. Millions of deaths are caused by this vector-borne infection every year. Malaria spreads very quickly in dirty places and moist areas. World Malaria Day is celebrated every year to spread awareness among people about malaria. There are many such countries around the world that are still facing the health burden of the deadly disease.

For the first time 'World Malaria Day' was observed on 25 April 2008. The celebration of this day was started by UNICEF. The reason behind celebrating it is that every year many people lose their lives due to this disease all over the world but there is a lack of awareness about it even today. Malaria is said to be the disease first found in China, where it was called swamp fever at that time because the disease spread through the dirt. The first study on malaria was done by the scientist Charles Louis Alphonse Laverin in the year 1880.

Symptoms of malaria are mainly seen during the rainy season because there is an increased prevalence of mosquitoes. Symptoms of malaria include fever, nervousness, headache, pain in the hands and feet, weakness, etc. Ignoring these symptoms can worsen the condition. The best way to prevent malaria is to protect yourself from mosquito bites. You must sleep in a mosquito net and get rid of the water accumulated around the house.

Apart from this, it is also necessary to spray medicines in areas with stagnant water. Urge the local municipal workers or the Malaria Department, to get rid of stagnant water around your area. Most importantly, if the above-mentioned symptoms appear one must consult a doctor as soon as possible and start appropriate medicines. Extra caution is needed in the case of children and pregnant women.

(The above story first appeared on LatestLY on Apr 24, 2022 08:53 PM IST. For more news and updates on politics, world, sports, entertainment and lifestyle, log on to our website latestly.com).