On Menstrual Hygiene Day, which is being celebrated across the world, on May 28, we list down three brands, which have churned out ad campaigns, which are not only bold but also progressive. 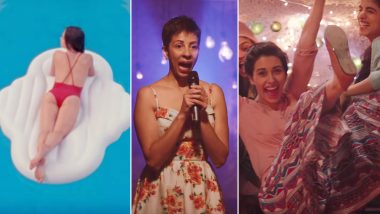 Menstruation is still considered a tabooed topic, not only in India but across the world. Around two-decades back, advertising of sanitary napkins in India was not just difficult, but it was not allowed in television before 9 pm. The tonality was extremely indirect, and particular attention was given to the fact, that they will be viewed in front of joint families. There was a lot of hush-hush around the word period, and it was often referred as '‘Un Dino’, Who Chaar Din’ to talk about the woman's pain and distress.

From there, we are now seeing advertisements, which don't hesitate to use the word periods, they refuse to acknowledge that women are down during those days. Also to initiate more conversations, and help people open up, these brand campaigns are attempting to instill in people that menstruation is a natural phenomenon. Even though we have moved a long way, but there is still a long way to go.

On Menstrual Hygiene Day, which is being celebrated across the world, on May 28, we list down three brands, which have churned out ad campaigns, which are not only bold but also progressive.

Whisper in their campaign 'Don't Touch the Pickle' dealt with the myth that menstruating women, when they touch pickle, it turns sour.

In this campaign, Whisper, defied the myth that women have to behave and sit properly, according to society standards.

Sofy last year, launched India's first ad on tampons to address all the queries, which are in the minds of young girls regarding its usage.

Sofy- I am not down!

We girls use the phrase -'I am down' or 'chumming', but refuse to use the word periods. In this video, stand-up commedian Radhika Vazz addresses this issue, through her wit and humour.

We have all grown up seeing, women bleed blue because this was the colour that was used in all the sanitary pads commercials. However, Bodyform in order to highlight that periods are normal, showed real period blood tricking down the legs of a woman.

Bodyform- No blood should hold us back

In another powerful commercial from Bodyform, it showed that no blood should hold us back, from achieving or wanting to do.

Change has been possible because of the shift in mind-set in the urban areas, however in the rural areas, situation hasn't improved. Girls still drop out of schools and colleges, so that they don't face embarrassment and humiliation  caused due to the use of cloth and the other unhygienic things. So brands should come up with educative campaigns, which can target this segment because girls in these areas are the real sufferers.

(The above story first appeared on LatestLY on May 28, 2018 12:31 PM IST. For more news and updates on politics, world, sports, entertainment and lifestyle, log on to our website latestly.com).