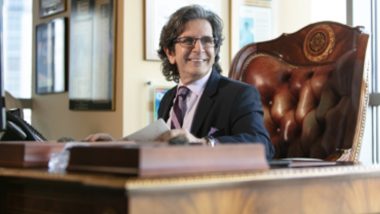 Mark NeJame is an American attorney, serial entrepreneur, media Legal Analyst, philanthropist, and speaker. He Is the co-founder of NeJame Law, a renowned law firm based in Central Florida. NeJame is a highly sought after and nationally recognized trial attorney specializing in personal injury, criminal defense, online defamation, employment law, and commercial/civil litigation. NeJame Law has frequently been recognized as Best Law Firm in Central Florida. Moreover, NeJame has achieved the highest rating for legal skills and ethics by Martindale Hubbell with its AV Preeminent Attorney Rating.

He is a noted Legal Analyst having been under contract twice with CNN. He has been frequently recognized for his philanthropy. He’s been awarded multiple accolades and awards. These include Humanitarian of the Year and the Lifetime Achievement Award in Philanthropy. He is the co-founder, along with his wife, of Runway to Hope, a charity dedicated to helping children and families battling pediatric cancer. He has been involved with innumerable other charities and civic causes for decades.

Remaining as the Senior and Managing Partner of NeJame Law, NeJame continues to be the entrepreneur he has always been since childhood. His various business interests have included, social media, real estate, entertainment, and technology. Currently he is launching a social media website, FaithSocial, which focuses on the world’s Christian community. Additionally, he is the founder of RemoveBadReviews.com which removes negative, unfair, and defamatory online reviews against businesses from the internet. He routinely works 55 – 80 hours a week and has an almost unmatched work ethic to this day.

NeJame came from a humble background. As a teenager, he couldn’t afford a nice Mother’s Day gift for his mother. Having heard that cactus plants didn’t die easily, he purchased some, decorated them in a glass bowl, and gave them to her as a gift. Channeling his artistic side, the terrarium he created was a big hit. Working at the time as a bagboy in a grocery store, he asked if he could put other terrariums in the chain stores on consignment.

Soon he was transporting the terrariums all over Central Florida in his VW Bug, to different retail outlets. Having made nursery connections for many other plant varieties by then, he went back to college at the University of Florida where he commenced selling plants on the side of the road to incoming students. With the money he made, he soon started a plant store and plant rental business while still remaining a college student. Two and a half years later he sold the business for 27 times his initial investment and used the profits from the sale of his business to put himself through law school.

NeJame started his law career soon after receiving his Juris Doctor degree. He moved back to his hometown in Orlando, Florida and co-founded the Law Offices Of NeJame & Hyman, P.A. in 1981. NeJame quickly developed a statewide reputation as a renowned and highly sought after criminal defense and trial attorney, rarely taking lunches or leaving his office before 10:00 pm most nights. Just two years after being admitted to the Bar, NeJame had his first homicide case. His client, Priscilla Mae Young, was accused of killing a young man. She claimed self-defense.

NeJame, passionate about Ms. Young’s innocence, challenged the jury at her trial by jumping atop a chair and illustrating the trajectory of the fatal bullet by pointing a fake gun at the jury (after advising and getting permission from the Court Deputy). He then threw a pair of dice against the judge’s bench, challenging the jury as to whether Ms. Young’s life was nothing more than a crap shoot. The headline the next day was: Not Guilty. Jurors Hug Defendant. NeJame’s passion and compassion for his clients remains just as strong today…except now he has the benefit of decades of added experience.

NeJame has handled cases in multiple states throughout the United States and also in the Caribbean. Among his many high profile cases have been Lou Pearlman, Tiger Woods, George and Cindy Anthony, Congressman Alan Grayson, Sheldon Polakoff (4x), and Leo Visco. In one notable case, he brought a case and recovered against NBA legend Charles Barkley for throwing his client through a plate glass window. He is currently bringing a claim against WBA World Lightweight and Featherweight Boxing Champion Gervonta Tank Davis for battering his client, who was providing aid to Davis’ child’s mother. He notably turned down George Zimmerman’s request for representation on two occasions regarding the death of Trayvon Martin. He additionally terminated his representation of George and Cindy Anthony when they requested that he speak on behalf of their daughter Casey Anthony, who was accused of murdering their granddaughter, Caylee Anthony.

Mark E. NeJame was born in 1955 in Orlando, Florida. His parents separated when he was 10 years old, due to his father’s alcoholism. He and his siblings were estranged from their father. He was raised by his single mother, Ann, with the help of his grandmother, Edna. There was never much money but always a full refrigerator and a house filled with love. He grew up with two younger sisters, Paula and Christine. NeJame hails from Lebanese heritage.

Despite the great legal and business success he has achieved, NeJame never forgot his roots. The motto in his household is, “To those who much is given, much is expected.” NeJame is married to his wife, Josie. They have two daughters, Valentina and Alessandra. The family is actively engaged in charity work, civic involvement, and social justice. NeJame has been a crusader for social justice since childhood and beams with pride that this wife and children similarly embrace these values. Whether issues of racial justice, supporting LGBTQ equality, women’s rights, or any aspect of society where inequality exists, NeJame and his family are a strong and reliable voice.

NeJame has been consistently listed as one of the 50 Most Powerful People In Central Florida. His law firm, NeJame Law, has been recognized as Best Law Firm in Central Florida multiple times.

In 2010, NeJame and his wife Josie, established Runway To Hope, www.runwaytohope.org, a non-profit organization that raises money and provides support for pediatric cancer children and their families. They receive no compensation and have raised millions of dollars for the cause of battling pediatric cancer. Millions have been donated and pledged to all three of Central Florida’s children hospitals. Additionally, a Family Assistance Fund was created , providing direct aid to hundreds of families with children battling cancer. Runway to Hope has been recognized as Best Charity Event in Central Florida on 13 occasions, with thousands attending and each event hosted annually by national celebrities.

Apart from Runway to Hope, NeJame has hosted and supported numerous other charity events including the Heart Fund Ball (heart), Shepard’s Hope (working poor), Bahamian Hurricane Relief, the Masquerade Ball (HIV/AIDS), Seeds of Peace, and Fashion Funds the Cure (pediatric cancer) along with his involvement in several other non-profit organizations, such as the Board of Directors of the International Prostate Cancer Foundation. He is also a legal speaker, having lectured at numerous events addressing audiences on major legal cases and issues. As a renowned trial lawyer, he has volunteered teaching law enforcement for over 25 years and has been a guest speaker and lecturer to law schools, legal seminars, and the FBI. NeJame is politically active, having hosted numerous dignitaries in his home, including Speaker of the House, Nancy Pelosi and President Joe Biden.

NeJame is an avid world traveler, having visited dozens of countries in continents around the world. With the easing of covid restrictions, he and his family are scheduling their newest travel adventure to Tanzania. In addition to his traveling, NeJame is a gardening enthusiast, often found weeding or planting flowers. He loves creating new businesses and the joys and challenges of entrepreneurship. NeJame works out with his trainer daily, primarily consisting of the deepest of stretching, yoga, light Pilates, and massage. Being extremely health conscious, he has not consumed alcohol, red meat, deep fried foods, or caffeine in over 43 years. He has been drug free his entire life.

A dedicated and devoted family man, husband to Josie, and father to Valentina and Alessandra, NeJame spends most of his free time with his family. Whether boating on their lake, traveling, enjoying the vast options of Central Florida, watching Netflix together, or discussing social issues or politics of the day, being with his family is his greatest source of enjoyment.