Michael Ian Sugrue continues to captivate audiences with his haunting dark fantasy, Ivan: The Chronicles of Ahmmal. Featuring both a twisty plot and an intriguing spin on the nature of the afterlife, Sugrue’s work is a compelling read set in a remarkable world. 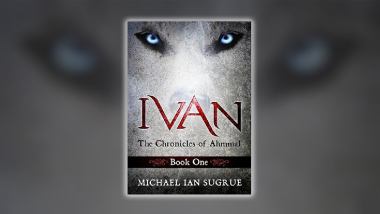 Ivan: The Chronicles of Ahmmal

Michael Ian Sugrue continues to captivate audiences with his haunting dark fantasy, Ivan: The Chronicles of Ahmmal. Featuring both a twisty plot and an intriguing spin on the nature of the afterlife, Sugrue’s work is a compelling read set in a remarkable world.

In Ivan: The Chronicles of Ahmmal, the Heavens and the Rainbow Bridge are threatened by the escape of the evil goddess Skadii. As she plots to transform an ancient clan of elves into a ravenous army of daywalking vampires, a dragon threatens to destroy all of humankind. Ivan emerges from the ashes, a young hero of indomitable spirit who seeks to unite humans and elves forever.

But after encountering an ominous prophecy tied to a legendary legacy through the mark of the beast, Ivan must battle fiendish villains and vanquish loathsome creatures in pursuit of his mission. Ivan: The Chronicles of Ahmmal is also the story of two orphaned cubs from vastly different worlds—one a wolf and the other a wildcat—who forge an unbreakable sibling bond fostered by unconditional love.

Fans of The Lord of the Rings and Game of Thrones will appreciate Sugrue’s expansive setting, relatable characters, and complex plotlines. Sugrue weaves elements of magick and mythology throughout the larger conflict, adding depth to his exploration of more serious themes like the importance of faith during times of trial.

Reviewers applaud Ivan: The Chronicles of Ahmmal, praising it as “an excellent adventure with [a] mixture of mythical creatures and viking-esque folklore.” Readers not only connect with Sugrue’s inventive premise, but also with the main characters who stand against the rising evil around them. Notably, Sugrue handles depictions of bigotry with sensitivity and nuance throughout the novel.

When asked to comment on this riveting addition to the dark fantasy genre, Sugrue states that he drew encouragement from his passion for inspiring people and a favorite quote from Albert Einstein: “Imagination is more important than knowledge.”

Ivan: The Chronicles of Ahmmal is available for purchase on Amazon.com or wherever books are sold.

Michael Ian Sugrue was born in Massachusetts and later relocated to Vermont. After working in a variety of technical fields, he transitioned to the creative arts. Sugrue is best known for his appearances in the independent films Kradeht and Incident at Montauk. He is also the author of Ivan: The Chronicles of Ahmmal. He can be found on Instagram as @timberrwolff or on IMDB for film.